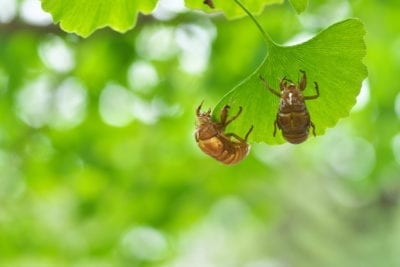 Ginkgo bilboa is an ancient tree that has been able to endure due to its ability to adapt, its resistance to disease, and the relative lack of pests on ginkgo. Even though there are very few bugs that prey on ginkgo trees, that doesn’t mean the species doesn’t have its share of ginkgo insect problems. So what kinds of ginkgo pests might be found on the tree?

For millennia, ginkgo trees have thrived in an ever-changing landscape, able to adapt to shifting environmental conditions. Another key to the tree’s lengthy survival is a lack of ginkgo insect problems.

While the tree is generally considered to be pest-free, even ginkgoes are victim to the occasional pests that, while not serious, can be a minor annoyance. Cicada bugs are one example.

Types of Pests on Ginkgo Trees

Very few bugs on ginkgo trees can be found but occasionally foliage eating caterpillars, like loopers, attack them. These ravenous eaters have been known to chew through the tender leaf leaving just the veins, known as skeletonization. This feeding habit may result in defoliation, dieback, and possible death, especially if the infestation is severe.

Luckily, this is rare and most random caterpillars can be hand plucked from the tree. Also, natural predators, such as lacewings and assassin bugs, can be released to naturally manage these ginkgo pests.

If all else fails, which is unlikely since ginkgo is rarely attacked by pests, applications of the low toxic, microbial pesticide Bacillus thuringiensis should provide adequate pest control for your ginkgo tree.