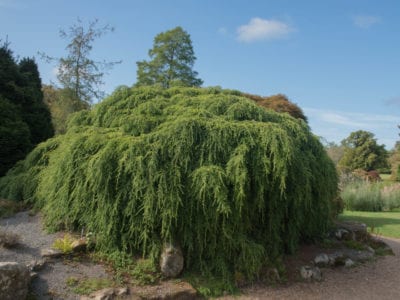 Weeping hemlock (Tsuga canadensis ‘Pendula’), also known as Canadian hemlock, is an attractive evergreen tree with a graceful, weeping form. Read on to learn about planting a weeping hemlock in your garden.

There are a number of weeping hemlock varieties available to gardeners, all known collectively as ‘Pendula.’ Sargent’s hemlock (‘Sargentii’) is one of the most popular. Others include ‘Bennett’ and ‘White Gentsch.’

A moderate grower, weeping hemlock reaches mature heights of about 10 to 15 feet (3 to 4.5 m.), with a width of up to 30 feet (9 m.), depending on how the tree is pruned. Weeping hemlock displays spreading branches and dense foliage with a delicate, lacy texture, but there’s nothing fragile about weeping hemlock trees, which grow in USDA plant hardiness zones 4 through 8.

Prune weeping hemlock trees as needed in late winter or early spring to control size or maintain a desired shape.

Printer Friendly Version
Read more about Hemlock
<Previous
Did you find this helpful? Share it with your friends!
FacebookTweetPinEmail
Related Articles
Newest Articles
You might also like…
Additional Help & Information