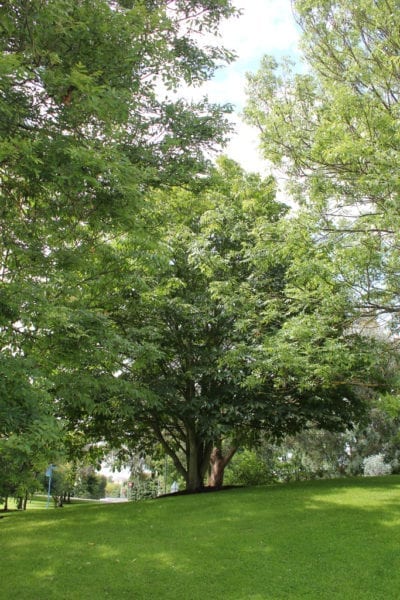 What is a Japanese Horse Chestnut?

The Japanese horse chestnut (Aesculus turbinata) is a member of the family Hippocastanaceae along with other varieties of horse chestnut and buckeye. It is native only to Japan, on the island of Hokkaido and the central and northern regions of Honshu.

Under ideal conditions, Turbinata chestnut trees can grow rapidly and attain heights of up to 10 feet (30 m.). It has compound, palmate leaves with five to seven toothed leaflets attached at the same point on a central stalk.

This deciduous beauty offers year-round color and interest in the landscape. The gorgeous large leaves turn a brilliant orange in the fall while in the spring the entirety of the tree is covered with foot long (31 cm.) creamy-white flower stalks accented with a hint of red, and winter buds are a cheerful glossy red.

Spring borne flowers give way to an almost spineless, ovoid yellow-green husk that encases a single brown seed. These seeds have been used as an emergency ration for centuries and are to this day used in traditional Japanese confectionaries such as rice cakes and balls. An extract made from the seed has also been mixed with alcohol to treat bruises and sprains in early Japanese folk medicine.

Horse chestnuts do not tolerate drought conditions, so be sure to select a site not only in full sun, but with moist, humus-rich soil. Plant the tree either in the spring or fall depending upon your climate. The planting hole should be about three times the width of the root ball and deep enough so that the root ball is flush with the soil.

Place the tree in the hole, making sure it is straight, and then fill the hole with water. Allow the water to absorb and then back fill the hole with the soil. Tamp the soil down lightly to remove any air pockets. Add a layer of mulch to retain moisture and retard weeds.