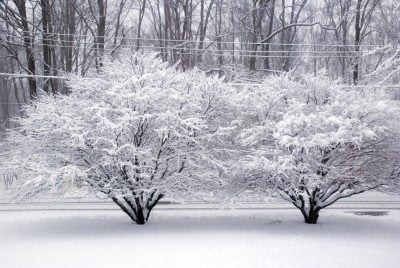 Winter isn’t always kind to trees and shrubs and it is entirely possible, if you live in a region with a cold winter, that you’ll see Japanese maple winter damage. Don’t despair though. Many times the trees can pull through just fine. Read on for information on Japanese maple winter dieback and what you can do to prevent it.

Heavy snow is often the culprit when your slender maple tree suffers broken branches, but winter damage of Japanese maple can be caused by various aspects of the cold season.

Often, when the sun is warm in winter, cells in the maple tree thaw during the day, only to refreeze again at night. As they refreeze, they can burst and ultimately die. Japanese maple winter dieback can also be caused by drying winds, scalding sun, or frozen soil.

One of the most obvious signs of winter damage of Japanese maple are broken branches, and these often result from heavy loads of ice or snow. They are not the only possible problems though.

You may see other types of Japanese maple winter damage, including buds and stems that are killed by the cold temperatures. A tree may also suffer frozen roots if it is growing in a container above the ground.

Your Japanese maple may have sunscald of its foliage. The leaves turn brown after they are scalded by bright sunshine in cold weather. Sunscald can also crack open the bark when the temperatures plunge after sunset. Tree bark sometimes splits vertically at the point where the roots meet the stem. This results from cold temperatures near the soil surface and kills the roots and, eventually, the entire tree.

Can you protect that beloved Japanese maple from winter storms? The answer is yes.

If you have container plants, winter protection for Japanese maple can be as simple as moving the containers into the garage or porch when icy weather or a heavy snowfall is expected. Potted plant roots freeze much faster than plants in the ground.

Applying a thick layer of mulch – up to 4 inches (10 cm.) – over the root area of the tree protects the roots from winter damage. Watering well before winter freeze is also a good way to help the tree survive the cold. That kind of winter protection for Japanese maples will work for any plant in the cold season.

You can provide extra protection for Japanese maples by wrapping them carefully in burlap. This protects them from heavy snowfall and frigid winds.