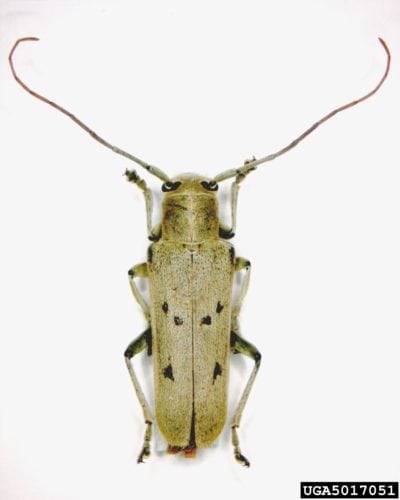 Image by Pa Dept of Conservation and Natural Resources, Bugwood.org

Controlling linden borers is never high on your to-do list until your trees are attacked by them. Once you see linden borer damage, the subject rises quickly to the top of your priority list. Are you at the stage when you need linden borer information? Read on for a description of the signs of linden borers in your garden and tips for linden borer control.

Not all insect damage is caused by pests imported into the U.S. Native insects can become pests too, given the right circumstances. Take the linden borer (Saperda vestita), for example. This long-horned beetle is native to the eastern and central regions of the country.

The adult insects are olive green and ½ to ¾ inches (12.5 – 19 mm.) long. They have antenna that are just as long as and sometimes longer than their bodies.

It is during the insect’s larval stage that it causes most damage. According to linden borer information, the large, white larva dig tunnels just below the bark of a tree. This cuts off the flow of nutrients and water to the foliage from the roots.

Which trees are impacted? You are most likely to see linden borer damage in linden trees, or basswood (Tilia genus), as its name implies. Some signs of linden borers may also visible in trees of the Acer and Populus genera.

The first evidence of linden borer attacks is usually loose bark. It bulges out over areas the larva are feeding. The tree canopy thins and branches die back. Weak and damaged trees are the first to be attacked. If the infestation is large, the trees may die quickly, though large specimens may show no signs for up to five years.

Controlling linden borers is accomplished most effectively by prevention. Since weakened trees are the most vulnerable to attack, you can work toward control by keeping your trees healthy. Give them the best cultural care possible.

You can also rely on the help of natural predators to help in controlling linden borers. Woodpeckers and sapsuckers eat the insect larva, and some types of braconid wasps also attack them.

If these methods don’t work in your situation, your linden borer control may depend on chemicals. Permethrin and bifenthrin are the two chemicals suggested by experts as a way to start controlling these tree borers. But these chemicals are sprayed on the exterior of the bark. They only affect newly hatched larvae on the bark surfaces.