No Fruit On Lychee Tree: What To Do When Your Lychee Isn’t Fruiting 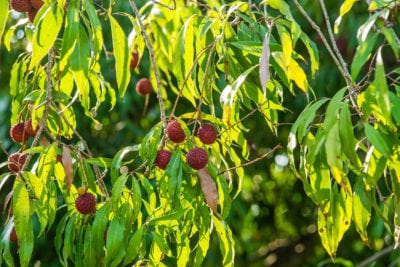 Lychee is a delicious tropical fruit, actually a drupe, that is hardy in USDA zones 10-11. What if your lychee won’t produce? There are a couple of reasons for no fruit on a lychee. If a lychee isn’t fruiting, you’ve come to the right place. Read on to find out how to make a lychee tree fruit.

When Do Lychee Trees Fruit?

Probably the most obvious answer to why a lychee isn’t fruiting is timing. As with every fruiting tree, the time must be right. Lychee trees don’t begin producing fruit for 3-5 years from planting – when grown from cuttings or grafting. Trees grown from seed, may take up to 10-15 years to fruit. So a lack of fruit may just mean the tree is too young.

Also, trees fruit from mid-May to early July, so if you are new to growing the tree (just bought the house, etc.), it may be that it is too early or late in the growing season to see any fruit.

How to Make a Lychee Tree Fruit

Lychee is native to southeastern China and does not tolerate any frost. It does, however, need a certain number of chilling hours in order to set fruit, between 100-200 hours of standard chilling.

This means that if your lychee won’t produce, you might have to trick the tree a bit to get it to fruit. First off, lychee trees grow in regular cycles of growth followed by dormancy. This means that the tree needs to be in a state of dormancy during the cooler months when temps are at or below 68 F. (20 C.) to get the emerging buds to develop into blooms.

Lychee bloom from about late December through January. This means that you want the tree to end its dormancy between the end of December and the middle of January. How to get the tree to conform to your time line? Pruning.

The cycle of new growth forming and hardening off is a period of about 10 weeks. That means that by counting backwards from January 1, the first of July will be the starting point of the two 10-week cycles. What you are going for here is having the tree to bloom near the start of the New Year. To do so, prune the tree in the middle of July, ideally after harvest if you had one. The tree will then begin to flush out at the end to the beginning of August and will be re-synchronized.

Also, only trees up to the age of four really need consistent fertilizing. Older fruit bearing trees should not be fertilized after mid-fall.

Lastly, another reason for no fruit on lychee is that many varieties are just notoriously difficult to get to flower. ‘Mauritius’ is an exception and is more prone to blooming and fruiting easily. And, while many lychee set fruit without a cross pollinator (the bees do all the work), it has been shown that fruit set and production increases with cross pollination from a different cultivar.

Printer Friendly Version
Read more about Lychee Tree
<Previous
Did you find this helpful? Share it with your friends!
FacebookTweetPinEmail
Related Articles
Newest Articles
You might also like…
Additional Help & Information