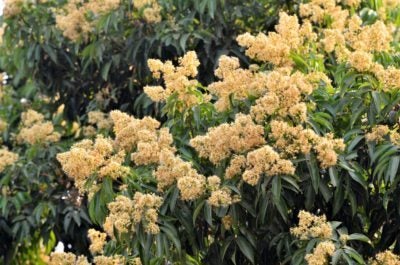 Lychee trees (Litchi chinensis) are beloved for their lovely spring flowers and sweet fruit. Sometimes, though, a lychee tree won’t flower. Of course, if the lychee doesn’t bloom, it won’t produce any fruit. If there are no flowers on lychee trees in your garden, read on for more information about the problem.

Reasons for Lychee Not Flowering

One of the most delightful aspects of a lychee tree is its long clusters of small flowers in early spring. In warmer zones, the flowers appear in February and March. In cooler parts of the range, look for them in April. If you see no flowers on lychee trees in your yard, there is definitely a problem.

Temperature – Climate is the first thing to consider when lychee trees won’t flower, or you notice lychee flower drop. Lychee trees need warm, humid summers but at least 100 winter chill hours. That effectively limits its range in this country to parts of California, Arizona, Florida, or Hawaii.

Generally, the trees thrive in USDA zones 10 and 11. If your zone is lower than this, the simple reason that your lychee doesn’t bloom is that it doesn’t get the sunshine and warmth it needs. Be sure you are in the right zone and that the tree is planted in a full sun site.

On the flipside, it may also be that your climate is too warm. Lychee flowers and fruits best in subtropical rather than tropical areas. They need a climate with a dry, chilly winter period lasting for at least three to five months and a warm spring during the flowering period. Hot, humid summers produce fruit.

Remember that young lychee trees may not flower if subjected to temperatures of 28 to 32 degrees F. (-2 to 0 C.) and may die when temperatures drop to 24 to 25 degrees F. (-3 to -4 C.). Wind can also reduce produce lychee flower drop. If you think low temperatures are preventing your trees from blossoming, consider transplanting them into a more protected area. You might also cover the trees during the colder part of winter.

Water – Water, too much or too little, impacts flowering in lychee trees. Lychees have a reputation as drought tolerant, but you need to irrigate newly planted lychee trees regularly during the first few seasons. After the trees mature, however, irrigation can reduce flowering. Stop watering the trees during the fall and winter until they bloom. This usually produces more flowers.