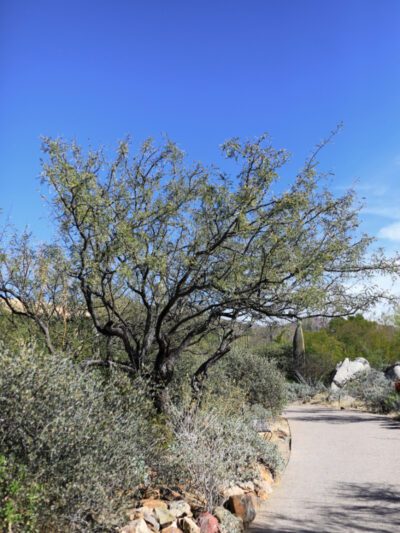 The velvet mesquite tree (Prosopis velutina) is a common feature in desert grasslands. What is a velvet mesquite tree? It is a large shrub to medium tree that is native to North America. The plants are known for their extreme drought and heat tolerance as well as ability to thrive in full sun to partial shade. Xeriscape gardeners are excited about growing velvet mesquite trees in domestic and landscape settings as attractive water saving plants with ease of care. Learn about these amazing plants and try them in your garden.

What is a Velvet Mesquite Tree?

One of the primary items in velvet mesquite info is its status as a legume. While it may not look like a classic pea or bean plant, it does produce pods that are similar. The plant’s shoots, leaves and pods are high in protein, making them excellent cattle fodder. Legumes also have the ability to fix nitrogen in soil, enhancing nutrient uptake. Velvet mesquite care is also low maintenance, with plants tolerant of a range of conditions and unfazed by most insects and disease.

The small to large tree or shrub that can approach 30 to 50 feet (9 to 15 m.) in height. It is a slow growing tree that may be found from central and southern Arizona down into Mexico. Plants may develop one sturdy trunk or many branches, each adorned with fissured dark brown bark. The wood is especially prized due to its variations in color and beautiful grain.

The leaves are pinnate and covered in fine gray hairs, giving the common name to this mesquite. In the wild, the trees tend to form thickets which are good habitat for a range of animal and bird species. Velvet mesquite info indicates that the flowers are sweetly scented and a favorite of bees, which make excellent honey from the nectar. Pods are tubular and 3 to 7 inches (8 to 18 cm.) long and edible.

How to Grow a Velvet Mesquite Tree

Provided these trees have well-draining soil, they can survive in a wide variety of sites. Plants can live up to 150 years in good conditions, so careful selection should be made to site at planting. Mesquites prefer alkaline soil, low humidity, low nutrient soils and heat. Velvet mesquite is cold hardy to 10 degrees Fahrenheit (-12 C.).

Plants that are heavily irrigated and fertilized tend to be less cold tolerant. Plants require supplemental irrigation during establishment. Once established, they need only occasional watering during the hottest months of the year. Mesquite trees can even thrive along streambeds in sandy, well percolating soil.

Pruning is optional but may be done to reduce height and form a better shaped plant; however, some blooms will be sacrificed the following season. Prune after bloom to preserve the next season’s flowering buds.

As with many drought tolerant plants, velvet mesquite’s Achilles heel is excess moisture and boggy soil. In areas without proper drainage, root rots and wood decay fungus can be issues of concern.

Another common problem is mistletoe, which takes nutrients from its host plant and diminishes the mesquite’s ability to feed and water itself. The weight of large mistletoe can also damage the tree’s branches.

The largest pest problem is from the giant mesquite bug. Their larvae are a minor pest concern but damage is usually minimal. The mesquite twig girdler may also cause cosmetic damage as its burrowing activities leave channels around slender stems which may brown out or die.