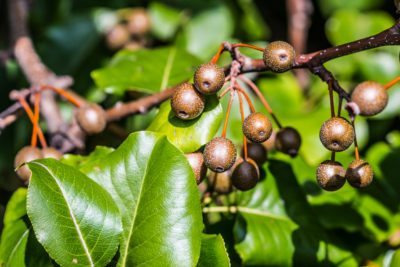 At one time Callery pear was one of the most popular urban tree species in eastern, central, and southern regions of the country. Today, while the tree has its admirers, city planners are thinking twice before including it into the urban landscape. If you’re thinking about growing Callery pear trees, keep reading to find out about the care of Callery pear trees and other useful Calleryana information.

What is a Callery Pear?

Callery pear trees (Pyrus calleryana) from the family Rosaceae, were first brought to the United States from China in 1909 to the Arnold Arboretum in Boston. Callery pear was again introduced into the U.S. to help develop fire blight resistance in the common pear, which was devastating the pear industry. This is somewhat conflicting Calleryana information, as while all current cultivars are resistant to fire blight in northern regions, the disease can still be an issue in trees grown in humid southern climates.

Around 1950, Calleryana became a popular ornamental leading to the development of an array of genotypes, some of which are self-pollinating. Trees were found to not be only visually appealing, but highly resilient as well. Other than fire blight, they are resistant to many other insects and diseases.

Callery pear thrives in a wide variety of environments and grows rapidly, often attaining heights of between 12 and 15 feet (4-5 m.) in an eight to ten year period. In the spring, the tree is a sight to behold with colorations from red and yellow to white.

Calleryana blooms in the early spring prior to leaf bud, making a spectacular showing of white blooms. Unfortunately, the spring blossoms of Callery pear have a rather displeasing aroma that is fairly short lived as the blooms become fruit. Fruit is small, less than a centimeter, hard, and bitter but the birds love it.

Throughout the summer, the leaves are bright green until fall when they explode with colors of red, pink, purple, and bronze.

Calleryana can be grown in USDA zones 4 to 8, with the exception of the cultivar ‘Bradford,’ which is suited to zones 5 to 8. The Bradford pear is the most familiar of the Callery pear trees.

Callery pears do best in full sun but are tolerant of partial shade as well as a slew of soil types and conditions from wet soil to drought. It is indifferent to city conditions such as pollution and poor soil, making a popular urban specimen.

The tree can grow up to 30 or 40 feet (9-12 m.) with an upright pyramid-like habit and, once established, care of Callery pear trees is minimal.

Unfortunately, one of the downsides of this specimen is that it has a fairly short lifespan of maybe 15 to 25 years. The reason for this is that they develop co-dominant leaders instead of one main trunk, making them susceptible to breaking apart, especially during rain or windstorms.

While the tree is resilient, its tendency to form dense thickets pushes out other native species that can’t compete for resources such as water, soil, space, and sun. This is good news for the survivability of Callery pear, but not such great news for native plants.

Additionally, although the birds love the fruit, they then spread the seeds, allowing Callery pear to pop up unbidden, again becoming competitors for resources against native flora, so yes, Calleryana can be labeled invasive.

Printer Friendly Version
Read more about Ornamental Pear
<PreviousNext>
Did you find this helpful? Share it with your friends!
FacebookTweetPinEmail
Related Articles
Newest Articles
You might also like…
Additional Help & Information