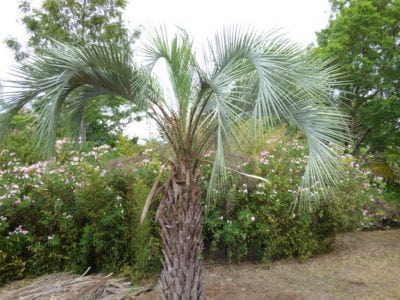 Image by Forest and Kim Starr

Think you can’t get that tropical look by growing palm trees in your cooler region? Think again and try growing a pindo palm. Pindo palms thrive in cooler regions and are hardy down to 10 degrees F. (-12 C.). Even though they tolerate cold, you might still have issues with a pindo palm. Problems with pindo palms may be insect or disease related, or cultural. The following article contains information on common pindo palm problems and how to manage pindo palm issues.

Pindo palms (Butia capitata) are slow growing, cold tolerant, upright trees with blue green to silver palm-shaped foliage that unfurls into a natural open-crown shape. These evergreens are native to Argentina, Brazil, and Uruguay. The trees blossom with showy, white blooms in the spring prior to the production of its yellow/orange fleshy fruit.

While pindo palms are cold tolerant and thrive in well-draining soils, they do not do well with “wet feet,” which increases the likelihood that the trees will get a disease. Pindo palms are also sensitive to salt spray.

What’s Wrong with my Pindo Palm?

Pindo palms are remarkably resistant to most problems, although you may encounter a few issues with pindo palms – most commonly environmentally caused or disease related.

They are, like most palms, susceptible to potassium deficiency. A lack of potassium causes gray, necrotic leaf tips. These may be harder to diagnose in a pindo than other palms due to the grayish foliage. A better method of identification is significant premature leaf drop.

Although less common, another pindo palm issue may be a deficiency in manganese. Symptoms of manganese deficiency appear as necrotic tips but on basal leaflets of newly emerged leaves.

Other problems with pindo palms are primarily from fungal diseases.

Phytophthora – Phytophthora is one such disease that rots roots and palm buds. This fungus is soil borne and fostered by wet weather. Fungal spores are moved by wind and rain and enter the palm through wounds. The resulting infection causes young fronds to droop and smell and decimates buds. As the disease progresses, mature fronds also become afflicted and brown, droop, and fall.

To treat phytophthora, remove any severely infected trees and destroy them. If the disease has not progressed too far, fungicidal sprays can be an effective treatment.

Diamond scale – In spite of its name, diamond scale is a fungal disease primarily found along the California coast. Usually, healthy pindo palms are not bothered by this disease, but if they are stressed, they may fall victim. Symptoms appear as dark, water-soaked lesions that, as the disease progresses, become black, diamond-shaped fungal bodies seen on the stalk and fronds.

There is no fungicide treatment for diamond scale, but it can be avoided. Be sure to plant the pindo palm in a well-draining area and avoid overwatering. Also, keep the plant healthy with a regular feeding schedule that is high in nitrogen and potassium.

Pink rot – Another fungal disease that afflicts stressed, weakened palms is pink rot. This disease especially affects trees that are in poorly draining soil and that are inadequately fertilized. Younger fronds are the first to show symptoms. Spots appear on the fronds of the palm and, as the disease progresses, they wilt and begin to rot. Also, pink spore masses develop along the trunk and sometimes also on the fronds. The tree becomes stunted and the fronds die eventually killing the tree if left untreated.

Pink rot can be treated using a combined approach of pruning and fungicidal spray.