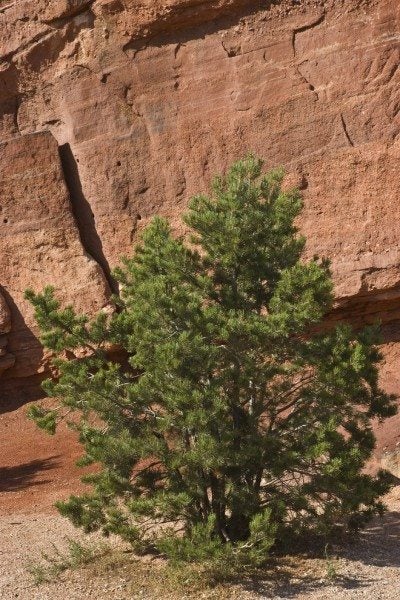 Many gardeners are unfamiliar with pinyon pines (Pinus edulis) and may ask “what does a pinyon pine look like?” Yet this little, water-thrifty pine may yet have its day in the sun as the entire country moves toward reducing water usage. Read on for more facts about pinyon pines.

If you read pinyon pine information, you find that the pinyon pine – a small pine tree that rarely grows above 20 feet (6 m.) tall – is extremely water efficient. It thrives in its native range in the American southwest on 15 inches (38 cm.) or less of annual precipitation.

Pinyon pine grows yellow-green needles, about 2 inches (5 cm.) long, that remain on the tree for some eight or nine years. The cones are small and resemble brown roses. Inside the cones you will find the treasured pine nuts, so it is no surprise that it is also written “pinon,” meaning pine nut in Spanish.

The pinyon pine is not a fast-growing tree. It grows slowly and steadily, developing a crown almost as wide as the tree is tall. After some 60 years growth, the tree might be 6 or 7 feet (2 m.) high. Pinyon pines can live long lives, even exceeding 600 years.

Homeowners in Utah, Nevada, and New Mexico will not ask “What does a pinyon pine look like?” or “Where do pinyon pines grow?” The trees are among the predominant pines in the Great Basin region, and selected state trees of Nevada and New Mexico.

If you are looking for trees that grow in dry soil and truly require minimal maintenance, think of the pinyon pine tree. Growing this tough tree is not difficult, as long as you do not try to offer too much pinyon pine tree care.

Plant pinyon pines in USDA plant hardiness zones 4 through 8 in well-drained soil in a full sun location. The trees generally do best at an elevation of less than 7,500 feet (2,286 m.). Install them in dry locations on hillsides, not lowlands where water collects.

Although the trees need regular irrigation at the time of transplant, you can and should reduce watering after they are established. Match your irrigation schedule to the tree and its growing conditions. If you want a general rule of thumb for watering, irrigate twice a month in summer and once a month in other seasons.

Despite the drought tolerance of these trees, pinyon pine tree growing works best with some irrigation. Repeated years of severe drought can stress the trees and lead to an attack by an insect called the pinyon Ips beetle.

However important it is to irrigate these trees occasionally, equally important in pinyon pine care is making a conscious effort not to overwater these trees. Many cultivated trees die from overwatering each year. Avoid offering frequent water, and never plant them on lawns.