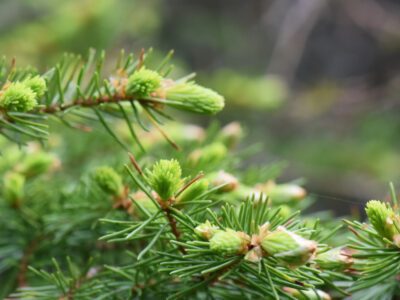 Yellow is not one of my favorite colors. As a gardener, I should love it – after all, it is the color of the sun. However, on the dark side of gardening, it signifies trouble when a beloved plant is turning shades of yellow and struggling to survive. It is often difficult to course correct this issue once it starts and it now can go one of two ways. The plant lives on with a little or perhaps no course correcting, or it dies regardless of our best efforts.

I was at this crossroads recently with the spruce trees in my wood lot. The needles on the ends of the branches were turning yellow, with the bottom branches most severely affected. I agonized over what it could be and what to do about it. I concluded that these were spruce needle rust symptoms. What is spruce needle rust, you ask? Well, let’s read on to learn more and discover how to treat spruce needle rust.

So, how do you go about identifying spruce needle rust? Forgive the visual, but from a distance, a tree afflicted with spruce needle rust reminds me of a person with frosted hair tips. This image of Guy Fieri from Food Network pops in my head or even Mark McGrath when Sugar Ray was in its heyday in the 90’s. But you probably need more descriptive spruce needle rust symptoms than that in order to make a positive identification.

One year old needles display pale yellow spots or bands in late winter or early spring, which intensify in color and later develop waxy looking yellow-orange blisters swelling with rust-colored spores. These blisters eventually rupture and release the spores, which infect the newly emerging growth, which in turn, will exhibit spruce needle rust symptoms the following year. The one year old diseased needles will drop from the tree prematurely shortly after releasing the spores.

Chrysomyxa ledicola/Chrysomyxa ledi: The spruce needle rust wrought by these fungi is “heteroecious” in nature. This means that its life cycle is dependent on more than one host. You may wonder why you are being schooled on the life cycle of a fungi. The answer is: It’s very important for effective disease management.

The alternate hosts for the rust produced by Chrysomyxa ledicola are Labrador tea (Ledum groenlandicum) and leatherleaf (Chamaedaphne calyculata). The fungus overwinters on Labrador tea and leatherleaf and spores are produced and released from these alternate hosts in early summer. The spores travel by wind and come in contact with spruce trees, infecting the current year’s needles.

In July and August, the current year needles turn yellow and develop whitish waxy blisters filled with yellow-orange spores. The spores released from these pustules travel by wind and rain to, you guessed it, the alternate hosts, where the spores germinate and infect the evergreen leaves they overwinter on. The diseased spruce tree needles drop from the tree in late summer or fall.

The needles are already infected and can’t be cured. If you’re thinking about annual fungicide sprays in order to be pro-active against spruce needle rust, I would advise against that as well because spruce needle rust infections are hard to predict and don’t happen every year. It may linger for a year or two but is not known to excessively overstay its welcome.

Spruce needle rust also does not kill trees; the damage is primarily cosmetic. It also does not prevent the formation of healthy buds on the ends of branches nor the production of new needles the next year. If you identify your rust as being caused by Chrysomyxa ledicola, you could remove any Labrador tea and leatherleaf plants (the alternate hosts) that are found within 1,000 feet (304 m.) of your spruce trees in order to stem the spread.

Printer Friendly Version
Read more about Spruce
<PreviousNext>
Did you find this helpful? Share it with your friends!
FacebookTweetPinEmail
Related Articles
Newest Articles
You might also like…
Additional Help & Information