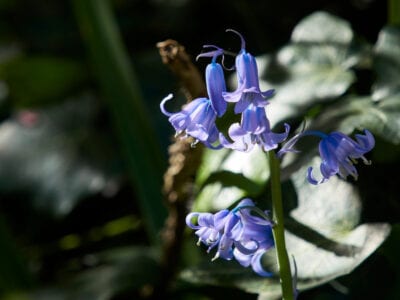 Bluebell creeper (Billardiera heterophylla formerly Sollya heterophylla) is a familiar plant in western Australia. It is a climbing, twining, evergreen plant that has the capacity to become invasive in other warm regions. If carefully managed, the plant makes a nice addition as an understory plant, with good frost tolerance once it’s established. Warmer regions can try growing bluebell creeper plants for their bell-shaped flowers and blue to purple fruits. Read on for more bluebell creeper info, including management, site conditions, and care.

What is Bluebell Creeper?

Semi-hardy warm season plants that grow rapidly and create a screen or groundcover are hard to find. Bluebell creeper is a native to parts of Australia but has become invasive in southern Australia, Victoria, Tasmania, and certain other tropical to semi-tropical areas. However, it won the Royal Horticultural Series Award of Merit as an outstanding landscape specimen. Australian bluebell care is very minimal once established and it has the ability to withstand drought once mature.

The former genus name Sollya honors Richard Solly, a late 18th century botanist, while the designation, heterophylla, is from the Latin words ‘hetero,’ meaning other and ‘phylla,’ meaning leaf. This refers to the differently shaped leaves which are oval to lance shaped and glossy. The leaves may grow just under 2 to 3 inches (5-8 cm.) in length.

The entire plant can achieve 3 to 5 feet (1-1.5 m.) in height with a similar spread. One of the more important aspects of bluebell creeper info is its preference for cool sun to partial shade locations, making it perfect for low light situations that are notoriously difficult to plant. Flowers are borne in auxiliary clusters, individually nodding and deeply blue.

How to Grow Bluebell Creeper

Try growing bluebell creeper plants in a lightly sheltered location, such as against a wall. These plants need some support as they establish but will gradually twine stems and self-support over time.

Propagation is by seed or softwood cuttings. Soil should be well draining, humus rich, and kept evenly moist for best appearance. Bluebell creeper plants are hardy where temperatures can drop to 20 to 25 degrees F. (-7 to -4 C.). In cooler regions, try growing the plant in a container in winter and move outdoors in spring and summer when all danger of frost has passed.

Plants bloom spring through summer and develop small, oval fruits that ripen in early autumn. Each fruit contains up to 50 seeds and plants self-sow freely. For management, it is best to remove fruits before they drop. Prune in late winter to early spring.

Keep plants lightly moist but not boggy. Apply mulch around the root base in winter to protect established plants from any light freezes. Young plants should be grown in a greenhouse or under glass to protect tender new roots from cold snaps.

This plant is generally disease free but may occasionally be attacked by red spider mites. Use a horticultural oil to combat these tiny predators of plants.

During the high growing season use a balanced liquid fertilizer monthly.