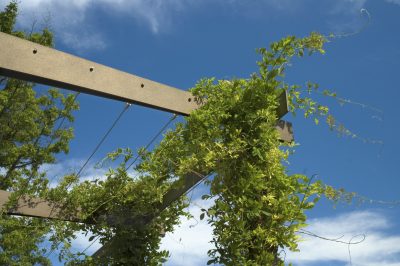 Getting Climbing Hydrangea to Climb

Climbing hydrangeas climb by aerial roots that stick to surfaces. Climbing hydrangea attach best to rough textured surfaces like bricks, masonry, and tree bark rather than climbing along trellises. However, they do not cause any damage to buildings or trees they climb, other than leaving behind a sticky residue. Since they like part shade and specifically afternoon shade, they will grow best on a north or east facing wall, or up large shade trees.

How to Make a Climbing Hydrangea Climb

If you have a climbing hydrangea not climbing, it may just be too young and putting all its energy into root establishment. It may also be having a hard time attaching to the support you are trying to get it to climb.

You can give it a little help climbing up trellises, arbors, and such by loosely tying stray branches to the support the direction you want them to grow. When attaching climbing hydrangeas to support, use a soft but strong material like cotton string, twine, or nylon. Never use wire to attach any plant to anything, as the wire can seriously damage stems and branches.