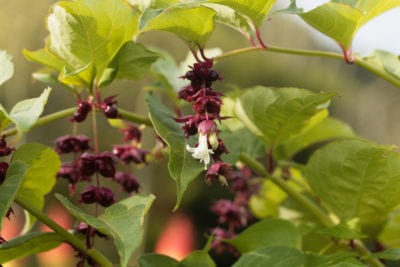 As the name would suggest, Himalayan honeysuckle (Leycesteria formosa) is native to Asia. Is Himalayan honeysuckle invasive in non-native regions? It has been reported as a noxious weed in New Zealand and Australia but doesn’t pose a problem in most regions. You can control it easily, as with most exotic flowering plants, by removing spent flowers before they form seed. Other than that potential issue, Himalayan honeysuckle care is straightforward and relatively simple.

What is Himalayan Honeysuckle?

Himalayan honeysuckle plants develop a truly unique looking flower. It is a carefree blooming plant that is attractive to butterflies, bees and even hummingbirds. The blooms are followed by tiny purple berries that are edible and said to taste like toffee or caramel.

Himalayan honeysuckle plants are native to the forest land of the Himalayas and southwestern China. It develops into a multi-stemmed bush with hollow branches. The bush can grow 6 feet (1.8 m.) tall with a similar spread and is adorned with large heart-shaped leaves.

The real attraction are the flowers. Bell-shaped white flowers descend from brilliant scarlet bracts, lending the flowers an exotic appearance. Flowers are evident from June up until September. Plants are not hardy and will experience die-back in fall but will sprout new stems and leaves in springtime rain and warmth.

This foreign beauty is hardy to United States Department of Agriculture zones 7-10. If the root zone is protected, new growth will return. In warm regions, the plants will not drop leaves or die back and benefit from pruning in winter to make the plant more compact. Flowers appear on new growth so heavy pruning will not affect blooms.

If you wish to start new plants, sow seeds in a cold frame in fall in warm regions or start indoors in flats 6 weeks before the date of the last frost in northern gardens. The plants can also be grown by cuttings or division.

In hotter regions, situate the plant where it will receive afternoon sun. Keep the surface of the soil moist but avoid watering to the point that soil is boggy.

Feed the plant monthly during the growing season with a balanced liquid fertilizer.

Although it may seem extreme, cut plants back to 6 inches (15 cm.) from the ground. New shoots will form and the plant will achieve its previous height by the end of the next growing season. To prevent self-seeding, remove flower heads before they seed or in cooler regions where this is not a problem, leave them and watch the birds go nuts for the fruit.