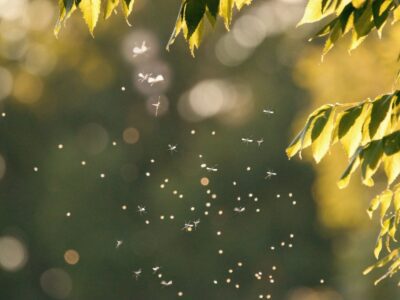 Honeysuckle is a controversial plant. While North America has native species, invasive honeysuckles are a real problem. They out-compete native plants and provide a less nutritious food source for wildlife. More recently, scientists have discovered another problem: Non-native honeysuckles might increase your yard’s mosquito population.

Why Is Bush Honeysuckle Bad?

While the U.S. has native honeysuckles—attractive flowering vines that pollinators love—non-native bush honeysuckles have become much more widespread. The most common are Tatarian, Morrow’s, Amur, and Bell’s.

Non-native bush honeysuckles are bad to have around mostly because they crowd out native species that are better for wildlife. They leaf out earlier and block light to incoming native plants.

Birds eat the berries of bush honeysuckle, but they are essentially junk food and don’t provide adequate nutrition. Another reason to remove any invasive honeysuckle from your property is that they attract and support disease-carrying mosquitoes.

Mosquitoes carry many diseases, notably in the U.S., the West Nile virus. They’re more than just a nuisance, and it’s best discourage them from congregating and breeding in your yard.

Mosquitoes might love your garden if you have standing water and a lot of yard debris, like grass clippings, overgrown plants, and leaf piles. They are also drawn to certain plants, like those that grow in water or tolerate standing water.

Water and leaf litter are the main attractants for mosquitoes because they lay eggs in water and feed on the bacteria that grow on decaying leaves. Scientists have also discovered that the leaf litter of certain plants, when dropping into standing water, attract and better support mosquitoes.

This is another reason to dislike non-native honeysuckle. Researchers found that the habitat created by standing water and Amur honeysuckle leaf litter yields high amounts of adult mosquitoes. What makes these among the best plants for mosquitoes isn’t yet understood.

Another species that had a similar result was autumn olive, also invasive. The study found that blackberry, a native species, resulted in a large deposit of mosquito eggs, but low survival rates of the larvae. More research is needed to figure out why different leaves in the water impact mosquito survival.

Knowing which plants attract mosquitoes and the conditions in which they thrive can help you make your garden more comfortable. It can also protect you and your family and pets from disease. If you have bush honeysuckle, take steps to eradicate it.

Printer Friendly Version
Read more about Honeysuckle
<Previous
Did you find this helpful? Share it with your friends!
FacebookTweetPinEmail
Related Articles
Newest Articles
You might also like…
Additional Help & Information