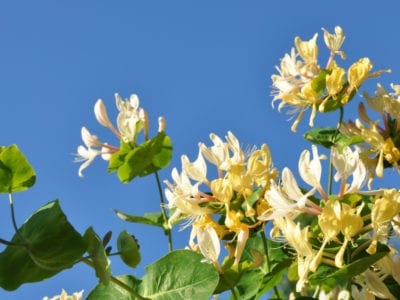 For many people, the intoxicating fragrance of honeysuckle (Lonicera spp.) conjures up memories of pinching off the base of a flower and squeezing a single drop of sweet nectar onto the tongue. In fall, the flowers are replaced by bright-colored berries that draw cardinals and catbirds to the garden. You’ll find many honeysuckle varieties to choose from, with long-lasting flowers that bloom in shades of yellow, pink, peach, red and creamy white.

The different types of honeysuckle include both shrubs and climbing vines. The vines climb by twining themselves around their supporting structure, and can’t cling to solid walls. Most need spring pruning to keep them from growing out of control and becoming a tangled mass of vines. They regrow quickly, so don’t be afraid to give them a severe cut.

Trumpet honeysuckle blooms in spring in shades of red and pink. Japanese honeysuckle produces pink or red blossoms from summer through early autumn. You can train both species to a trellis, or let it ramble as a ground cover. Mow vines used as ground cover with the blades set as high as they will go in late winter to get rid of the dead undergrowth and control the spread.

When it comes to honeysuckle shrubs, winter honeysuckle (L. fragrantissima) — grown in USDA zones 4 through 8 — is an excellent choice for informal hedges or screens. It also makes a nice potted plant for areas where you will enjoy the lemony fragrance most. The first, creamy-white blossoms open in late winter or early spring and the bloom season continues for a long time.

Sakhalin honeysuckle (L. maximowiczii var. sachalinensis) — USDA zones 3 through 6 — grows into shrubs similar in appearance and habit to winter honeysuckle, but the flowers are deep red.

Some people find the fragrance of honeysuckle too strong for more than a brief exposure, and for them, there is freedom honeysuckle (L. korolkowii ‘Freedom’). Freedom produces unscented, white blossoms with a blush of pink. Despite their lack of fragrance, they still attract bees and birds to the garden.