How And When To Prune Honeysuckle Plants 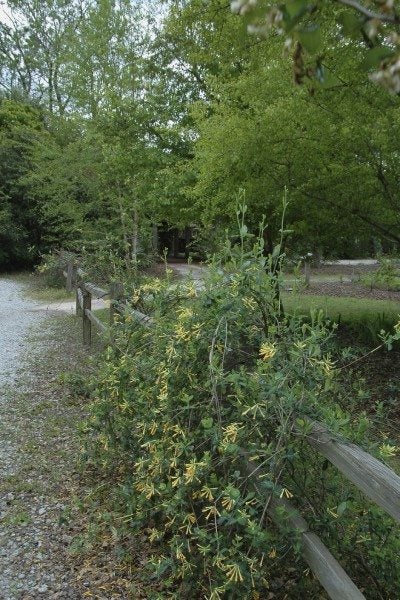 Honeysuckle is an attractive vine that grows quickly to cover supports. Distinctive fragrance and a profusion of flowers add to the appeal. Read on to learn how and when to prune honeysuckle plants in this article.

When to Prune Honeysuckle Vines and Bushes

Honeysuckles include both vines and shrubs. Prune honeysuckle bushes in the spring, as soon as the flowers drop off. You can prune honeysuckle vines lightly any time of year. Wait until fall or winter when the vine is dormant for major pruning jobs.

Honeysuckle pruning begins with the removal of the three D’s: dead, damaged, and diseased stems. Next, correct stems that are growing in the wrong direction and those that rub against each other. Cut a stem all the way back to a point where it joins another stem, or shorten the stems by cutting just beyond a leaf node.

Once you have resolved these problems, shape the plant by removing stray stems that wander away from the support. You should also thin out the top of the plant to let sunlight and air inside. Good air circulation is essential to prevent diseases like powdery mildew.

When a honeysuckle vine is overgrown, the branches become a tangled mess, making it impossible to prune selectively. Another problem with neglected and severely overgrown honeysuckle vines is that sunlight can’t reach the bottom branches because the top is too dense. When this happens, the leaves fall off the lower branches, leaving bare stems.

The best way to correct a severely overgrown honeysuckle is to cut the plant back to about a foot (31 cm.) from the ground. Severe pruning should be done in the winter while the plant is dormant. The vine grows back quickly but doesn’t bloom the following spring. Keep the soil around the plant moist at all times to help the vine regenerate.

You can also rejuvenate overgrown honeysuckle bushes this way, but it’s better to rejuvenate them gradually. Removing one-third of the branches each year for three years rejuvenates the plant over time without leaving a hole in the landscape.

Knowing how and when to prune honeysuckle can mean the difference between a well-behaved vine and one that threatens to take over your garden. Many types of honeysuckle are considered invasive weeds. Check with your local cooperative extension agent to find out the status of honeysuckle in your area before planting.