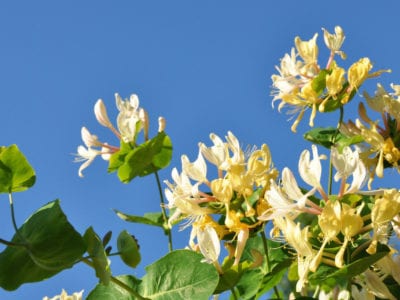 Everyone recognizes the lovely fragrance of a honeysuckle plant and the sweet taste of its nectar. Honeysuckles are heat-tolerant and wildly attractive in any garden. A honeysuckle plant is a great addition to any landscape and will draw abundant wildlife with its sweet, yellow to bright-red blossoms.

Honeysuckles (Lonicera spp.) belong to a large family that consists of hardy shrubs and vines that grow in almost every state in America. There are over 180 different varieties of honeysuckle. Some are deciduous and some, in warmer regions, are evergreen. Because of their versatility and abundance, growing and caring for honeysuckle vines is easy.

How to Grow a Honeysuckle Vine

While honeysuckles prefer full sun, they will tolerate some shade. The honeysuckle plant is also tolerant of different soil types, though it helps to grow the vine in well-draining soil amended with organic matter.

Honeysuckles can be grown as ground cover in suitable areas but most do best with some type of support, either along a fence or on a trellis. They can also be grown in containers.

Other than occasional watering, honeysuckle vine care is not difficult; however, pruning is a good practice. Vine species of honeysuckle can become invasive as a ground cover, if not controlled, and require clipping to tame. Therefore, regular shearing and shaping will keep this beauty within its boundaries. Pruning honeysuckle vine is generally done in the fall or winter when the honeysuckle plant is dormant. If your honeysuckle vine has been left untamed, don’t worry about giving it a good heavy prune. The vine will pop back up again in the spring. If you wish to use honeysuckle vines for erosion control, you will not need to prune them.

With annual pruning, honeysuckle vine care is not a problem. The plant will happily return each year, providing an abundance of blooms and sweet nectar for both you and wildlife.

Printer Friendly Version
Read more about Honeysuckle
Next>
Did you find this helpful? Share it with your friends!
FacebookTweetPinEmail
Related Articles
Newest Articles
You might also like…
Additional Help & Information