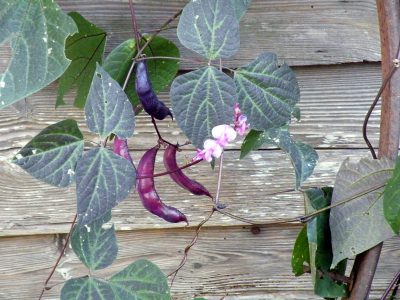 If you have a wall or fence you want to cover, you can’t go wrong with beans. Even if you’re not trying to mask something ugly, beans are great to have in the garden. They’re fast-growing and vigorous, and they often produce interesting flowers and tasty pods. Hyacinth bean vines go above and beyond in this regard. With light to dark purple flowers and striking fuchsia pods, they’ll brighten up absolutely any garden. What if you don’t have a garden though? Is it possible to grow these beauties in a pot and up a fence or railing? Keep reading to learn more about how to plant hyacinth beans in containers.

As with all potted vines, container-grown hyacinth bean vines need something to climb on. In their native tropics, where they can grow for several years, they often reach over 30 feet (9 m.) in length.

Hyacinth bean vines aren’t at all frost tolerant though, so, in most places, they’re grown as annuals. Even in a single growing season, however, they can get as long as 15 feet (5 m.). This means they need something tall and strong to climb.

Growing hyacinth beans in pots means that you can place them where you want. Place your container near the bottom of a railing or fence and let it climb away. Alternatively, plant your beans in a hanging pot and let the vines trail down to the ground in a spectacular cascade.

Hyacinth bean vines are very forgiving when it comes to growing requirements. They will do well in soil that is poor and both slightly alkaline and acidic. Any standard potting medium should be more than enough. They do require well-drained soil, so make sure your container has plenty of drainage holes.

They perform best in full sun, but they can take some shade. You can sow the beans outdoors after the last chance of frost or start them inside several weeks earlier.

The beans themselves are edible, but toxic if eaten raw. Always cook your hyacinth beans thoroughly before eating them.