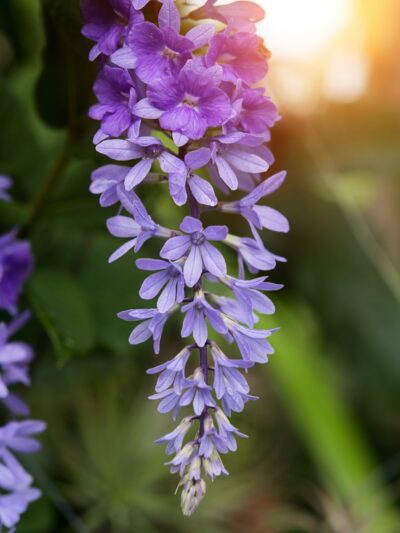 What is a Queen’s Wreath Vine?

Queen’s wreath vine is a gorgeous tropical vine that looks somewhat similar to wisteria with its floppy lavender blooms. These clusters of foot long, star shaped blooms flower several times a year on this evergreen.

This vining plant is native from Southern Mexico through Central America and on into northern and western South America. It is also found in Cuba, Jamaica, Puerto Rico, and Hispaniola. Queen’s wreath is also referred to as petrea, purple wreath, or sandpaper vine in reference to the plants stiffly textured foliage.

A rapid grower, the vine flowers multiple times per year between February and June. The flowers are densely packed clusters of blooms called racemes that from a distance look like grape clusters. Once the blooms fall from the vine, they leave behind purple calyces that decorate the vine for weeks. When the calyces do fall from the vine, they do so in a most entertaining manner, taking flight like so many whirligigs.

The purple queen’s wreath is the more common cultivar but there is also a white blooming cultivar called ‘Albiflora.’ This vine grows voraciously in its native habitat, but when cultivated the vine tends to be much smaller or trained as an espalier.

How to Grow Queen’s Wreath Vine

Queen’s wreath thrives in full sun but will tolerate partial shade in moist, fertile, and well-draining soil. It can be propagated by seed, cuttings, or air layering however, when growing from seed be advised that the plant will not bloom for two to three years.

Provide the plant with some type of support upon which to clamber be it a trellis or fence. When the plant does bloom the initial burst of blossoms may defoliate the vine, but leaves will form and return again.

When the plant is young it requires frequent watering but as the plant establishes it becomes more drought, wind, and salt tolerant. Plants should be protected from frost. In cooler regions, the vine should be grown in containers which can be overwintered indoors or inside a greenhouse or sunroom.

Once established little care is required, beyond the occasional pruning and watering. Queen’s wreath has few major pest or disease problems although it is susceptible to mold, scale, mealybugs, and less frequently spider mites.