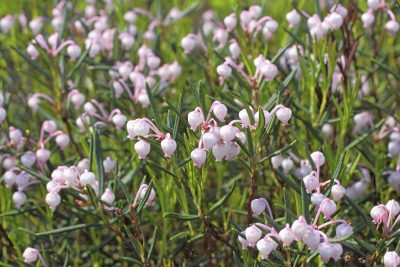 What is Bog Rosemary?

Bog rosemary plants, also known as marsh Andromeda because of the species name, are creeping evergreens. Low to the ground, no taller than a couple of feet (61 cm.), they thrive in soggy areas in the landscape.

This native is found growing wild in the northeast United States. It also is native to parts of Europe and Asia. The new growth of these marsh Andromeda shrubs is usually lime green, although sometimes you find reddish hues. The growth is covered with a waxy film and matures into a deep green or blue green with pale downy undersides.

Bog rosemary blossoms are unusual flowers. You’ll see a half-dozen tiny urn-shaped flowers growing together in a cluster at each stem tip. The flowers appear in May, each about ¼ inch (66 mm.) long and pale pink. The fruits of marsh Andromeda are small bluish dried capsules that turn brown in October. Neither the flowers nor the seeds are particularly showy.

If you have a perpetually wet corner of the garden, bog rosemary growing might be just the thing. True to its common names, marsh Andromeda loves and thrives in marshy areas.

When you have bog rosemary growing in a boggy spot in your backyard, you’ll find that it spreads quickly and requires little, if any, assistance. The plant tolerates compacted soil, wind and ice, preferring a location in USDA plant hardiness zones 3 through 6.

Another reason you won’t have to spend too much time on bog rosemary care: the plant has few disease or insect troubles. You don’t need to fertilize or prune it.