Java Fern For Aquariums: Is A Java Fern Easy To Grow 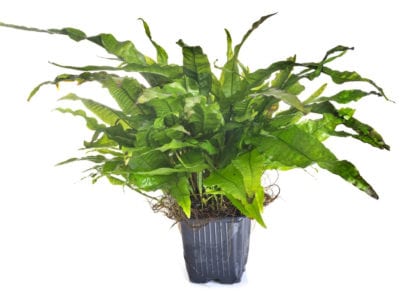 Is java fern easy to grow? It sure is. In fact, java fern (Microsorum pteropus) is an amazing plant easy enough for beginners, but interesting enough to hold the interest of experienced growers.

Native to Southeast Asia, java fern attaches itself to rocks or other porous surfaces in rivers and streams where the strong roots keep the plant from being washed away in the current. Interested in growing java fern for aquariums? Read on for basic information on growing this interesting plant.

There are several varieties of java fern for aquariums, including Windilov, Needle Leaf, Fern Trident, and Narrow Leaf. All are unique in appearance, but the growth requirements and care are the same.

Planting in a fish tank is easy and java fern care is uninvolved. The leaves generally aren’t nibbled by fish, but they love hiding in the nooks and crannies between stems and leaves.

If you’re planting a java fern in a fish tank, keep in mind that a larger tank is best because the plant can grow to around 14 inches (36 cm.) tall, with a similar width. Java fern for aquariums isn’t choosy about its surroundings and even grows in brackish water. The plant requires no specialized fish tank equipment. A simple, inexpensive light is fine.

Don’t plant in regular aquarium substrate. If the rhizomes are covered, the plant is likely to die. Instead, attach the plant to a surface such as driftwood or lava rock. Anchor the plants with string or fishing line or use a drop of super glue gel until the roots are established in a few weeks. Alternatively, you can probably purchase a pre-planted java fern for aquariums. Remove dead leaves as they appear. If you notice a lot of dead leaves, the plant may be getting too much light.