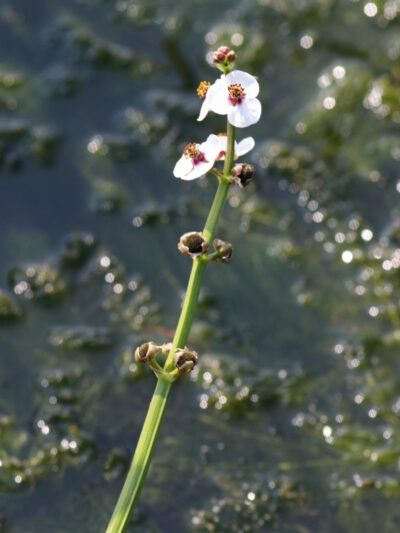 Most people may not have heard of the plant called katniss until reading the book, The Hunger Games. In fact, many people may even wonder what is katniss and is it a real plant? Katniss plant is not only a real plant but you have likely seen it many times before and growing katniss in your garden is easy.

Katniss plant (Sagittaria sagittifolia) actually goes by many names such as arrowhead, duck potato, swan potato, tule potato, and wapato. The botanical name is Sagittaria. Most katniss species have arrow-shaped leaves but in a few species the leaf is long and ribbon like. Katniss has white three-petaled flowers that will grow on a long, upright stalk.

There are about 30 species of katniss. Several species are considered invasive in some areas so when planting katniss in your garden, make sure that you double check that the variety you have selected is not invasive.

The tubers of katniss are edible and have been used by Native Americans for generations as a food source. They are eaten much like potatoes.

Where Do Katniss Plants Grow?

Different forms of katniss can be found in most parts of the United States and are native to North America. Most katniss plants are also considered marginal or bog plants. This means that while they can survive in a non-swampy area, they prefer to grow in wet and boggy areas. It is not uncommon to see these striking plants growing in ditches, ponds, marshes, or the edge of streams.

In your own garden, katniss is an excellent choice for a rain garden, a bog garden, a water garden, and for low lying areas of your yard that may get flooded from time to time.

How to Grow Katniss

As mentioned above, katniss should be planted in areas where its roots will be in standing water at least some part of the year. They prefer full sun but will tolerate some shade; however, if you grow it in a shady location, the plant will flower less. Once its roots have taken hold, katniss plant needs little other care, provided they get sufficiently wet soil occasionally.

Once established, katniss will naturalize in your garden. They spread by either self-seeding or rhizomes. If you wish to keep katniss from spreading too far, be sure to remove the flower stalks as soon as flowering has faded and divide the plant every few years to keep it a manageable size. If you choose to try growing a potentially invasive variety of katniss, consider planting it in a container that can then be submerged into the water or buried in the soil.

You can plant katniss in your garden with either divisions or seeds. Divisions are best planted in spring or early fall. Seeds can be sown in spring or fall. They can be direct seeded to the location you wish for the plant to grow or can be started in a pan that has dirt and standing water.

If you wish to harvest the tubers of the plant, this can be done at any time, though your harvest may be better midsummer through fall. Katniss tubers can be harvested by simply pulling the plants up from where they are planted. The tubers will float to the surface of the water and can be collected.

Whether you are a fan of the plucky heroine of The Hunger Games or just looking for a nice plant for your water garden, now that you know a little more about just how easy growing katniss is, you can add it to your garden.