What Is A Floating Forest: Information About Artfully Floating Trees 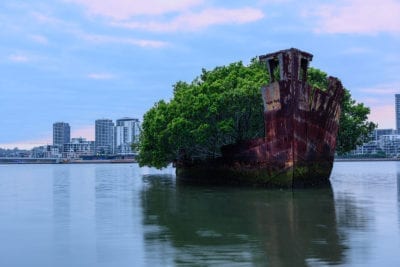 What is a floating forest? A floating forest, as the name suggests, consists basically of floating trees in various forms. Floating forests can simply be a few trees in the water or unique ecosystems that host a variety of interesting birds, animals, and insects. Here are a few floating forest ideas from around the world.

If you have a small backyard pond, you could recreate one of these fascinating habitats of floating trees yourself. Choose an item that freely floats and simply add some soil and trees, then let it go and grow – similar ideas include floating wetland gardens.

A historic port in the Netherlands is home to a miniature floating forest consisting of 20 trees in the water. Each tree is planted in an old sea buoy, previously used in the North Sea. The buoys are filled with a mixture of soil and ultralight lava rocks.

The Dutch elm trees growing in the “Bobbing Forest” were displaced as a result of construction projects in other parts of the cities and would have otherwise been destroyed. Developers of the project discovered that Dutch elm trees are sturdy enough to tolerate bobbing and bouncing in the rough water and they can withstand a certain amount of salty water.

It’s possible that floating trees, which help to remove carbon dioxide emissions from the atmosphere, may be one way to replace trees lost to shopping centers and parking lots as urban environments continue to expand.

Floating Forest in an Old Ship

A century-old ship in Sydney, Australia’s Homebush Bay has become a floating forest. The SS Ayrfield, a World War II transport ship, escaped a planned dismantling when the shipyard closed. Left behind and forgotten, the ship was reclaimed by nature and is home to an entire forest of mangrove trees and other vegetation.

The floating forest has become one of Sydney’s major tourist attractions and a popular site for photographers.

Some scholars believe there may have been gigantic floating forests in the antediluvian oceans. They think the forests, home to many unique living beings, were eventually broken up by the violent motions of rising floodwaters. If their theories are found to “hold water,” it may explain why the remains of fossilized plants and mosses have been found with marine sediments. Unfortunately, this concept is difficult to prove.

Printer Friendly Version
Read more about General Water Plant Care
<PreviousNext>
Did you find this helpful? Share it with your friends!
FacebookTweetPinEmail
Related Articles
Newest Articles
You might also like…
Additional Help & Information