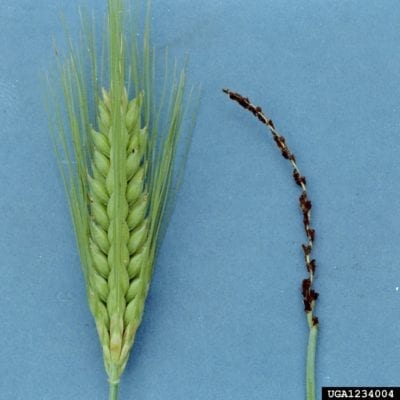 Smut is one of the fungal diseases that cause damage to crops like barley, oats, and rye. One type of smut is called “covered smut” and it is a real problem for those growing barley in this country and around the world. What is barley covered smut? How to treat barley covered smut? Read on for an overview of barley with covered smut, its symptoms, its impact, and your options to control it.

What is Barley Covered Smut?

The fungal disease is actually called “covered smut.” When it attacks barley though, some refer to it as covered smut of barley or barley covered smut. Barley with covered smut is caused by the fungus Ustilago hordei. It has a significantly real and very negative impact on a grain crop.

The covered smut fungus can be transferred to a barley crop by spores on the barley seeds, spores blown over in the wind, or spores overwintering in soil. That makes the disease more difficult to control.

About Barley with Covered Smut

The primary difference between regular smut that attacks barley and covered smut is that the spores of the fungus are covered by a light membrane. This essentially holds them in place (on smutted spikelets) until they are released during harvest threshing.

By the time the barley is ready for harvest, the kernels have been completely replaced by the moss of smut spores (called teliospores). Sometimes wind or rain ruptures the membrane earlier. Whenever this occurs, millions of microscopic teliospores are released into the field where they can attack other barley plants or infect the soil.

How to Treat Barley Covered Smut

Unfortunately, it is difficult to treat barley covered smut once the crop has been attacked. However, there are seed treatments for covered smut of barley that have proved effective.

The best barley covered smut control can be achieved by using certified smut-free seed. This can significantly reduce or eliminate the fungus from your barley crop.

If you are wondering how to treat barley covered smut seeds that aren’t smut-resistant, it’s a little more difficult. You can use a hot water treatment to get rid of covered smut fungi from contaminated seed, but it can also diminish the vitality of the seeds.

Your best option for barley covered smut control in this situation is to treat the seeds with contact-type fungicides. This controls covered smut on the outside of the seed, which will go a long way to reducing the impact of the disease.