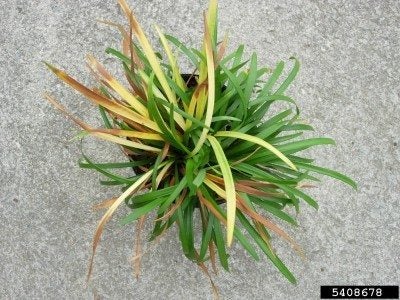 Fusarium crown rot disease is a serious problem that can affect a wide range of plant species, both annual and perennial alike. It rots the roots and crown of a plant and can lead to wilting and discoloration on the stems and leaves. There is no chemical fusarium crown rot treatment, and it can cause stunted growth and even eventual death.

Many of the symptoms of fusarium crown rot disease take place, unfortunately, underground. There are, however, signs that affect the above-ground part of the plant, too.

The leaves may become wilted and take on a yellowed, scorched appearance. Also brown, dead lesions or streaks may appear on the lower part of the stem.

Usually, by the time fusarium is visible above ground, its spread is pretty extensive below ground. It can also be seen in bulbs that are shriveled or rotten. Never plant these bulbs – they may be harboring the fusarium fungus and planting them could introduce it to otherwise healthy soil.

Once fusarium is in the soil, it can live there for years. The best way to prevent it is to keep the soil well-drained and to plant cultivars that are resistant to the disease.

If it has already appeared, the best method of treating fusarium rot is removing and destroying affected plants. You can sterilize soil by moistening it and laying down clear plastic sheeting. Leave the sheeting in place for four to six weeks during the summer – the intensified heat of the sun should kill the fungus living in the soil.

You can also leave an infected area unplanted for four years – without plants to grow on, the fungus will eventually die.