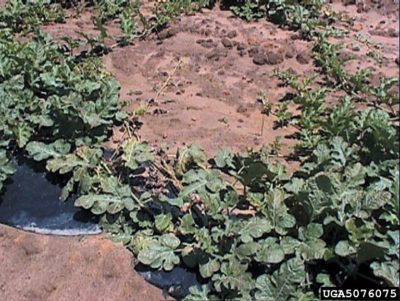 Fusarium is a fungal disease that afflicts cucurbits. Several diseases are the result of this fungus, each crop specific. Cucurbit fusarium wilt caused by Fusarium oxysporum f. sp. melonis is one such disease that attacks melons like cantaloupe and muskmelon. Another fusarium wilt of cucurbits that targets watermelon is caused by Fusarium oxysporum f. sp. niveum and also attacks summer squash, but not cantaloupe or cucumber. The following article contains information on recognizing fusarium symptoms in cucurbits and managing fusarium wilt in cucurbit crops.

Symptoms of fusarium wilt of cucurbits affected by F. oxysporum f. sp. niveum show early in development. Immature seedlings often damp off at the soil line. More mature plants may show early wilting only during the heat of the day, leading the gardener to believe the plant is suffering from drought stress, but will then die within a few days. During periods of rainfall, a white to pink fungal growth may appear on the surface of dead stems.

To positively identify fusarium wilt in watermelon cucurbit crops, cut back the epidermis and bark slightly above the soil line on the main stem. If you see a light brown discoloration on the vessels, fusarium wilt is present.

Fusarium oxysporum f sp. melonis affects only cantaloupe, Crenshaw, honeydew, and muskmelon. Symptoms are similar to those that afflict watermelon, however, streaks may appear on the outside of the runner at the soil line, extending up the vine. These streaks are first a light brown, but turn a tan/yellow followed by a dark brown as the disease progresses. Also, again, a white to pink fungal growth may appear on infected stems during periods of rainfall.

In the case of either pathogen, the fungus overwinters in old infected vines, seeds, and in the soil as chlamydospores, thick walled asexual spores that can survive in the soil for over 20 years! The fungus can live off the roots of other plants such as tomatoes and weeds without causing disease.

The fungus enters the plant through root tips, natural opening, or wounds where it plugs the water conducting vessels and results in wilt and eventual death. The incidence of the disease increases during warm, dry weather.