Small Holes On Leaves – What Are Flea Beetles? 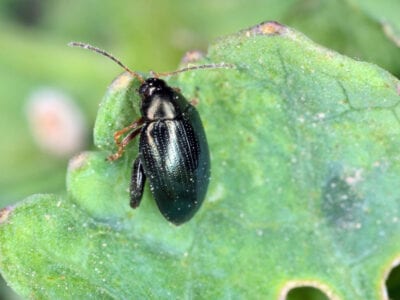 You may have noticed some small holes on the leaves of your plants; are you are wondering what kind of pest caused these holes? Some pests in the garden are more annoying than harmful, and flea beetles can be classified as that. While in most cases, flea beetles will not kill your plants, they can damage the leaves and be a nuisance with their hopping ways.

What are Flea Beetles?

There is no one scientific name for a flea beetle because flea beetles are actually several beetles in the same general family. Flea beetles are normally characterized by being very small and the fact that they jump from place to place like fleas do.

Since flea beetles actually make up a larger family of beetles, they vary in appearance. Some may be black, others brown, and still others green. They may also be striped or have colored spots or lines.

What are Flea Beetles Doing in Your Garden?

The signs of flea beetles are easy to spot. Flea beetles feeding will leave small holes in the leaves of the plant, almost as if the plant was hit by buckshot. Flea beetles’ larva will also attack the root system of a plant, which may make the plant more susceptible to other pests and diseases that will kill it.

While the damage done by flea beetles feeding is unsightly, most plants can survive a flea beetle infestation. The only plants you need to worry about are very immature plants that may not survive either the leaf or root damage caused by different flea beetles.

Since this is a pest that does little damage, you are best to use organic control of flea beetles. Once flea beetles have infested a bed, it is rather difficult to get rid of them for the current season (even with chemical controls), but steps can be taken to reduce the infestation and then eliminate it for next year.

If you follow these steps for organic control of flea beetles, then your flea beetle problem will be gone in a matter of a single season. The small holes on the leaves of the plant will stop appearing and your plant will once again be able to grow without damage.