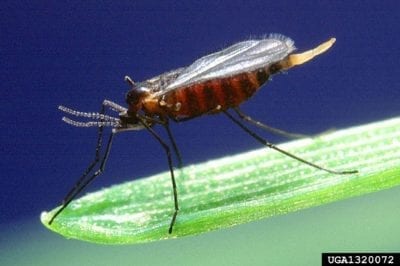 In recent years, interest in growing wheat and other grain crops in the home garden has drastically increased in popularity. Whether hoping to become more sustainable or growing grains for use in home beer brewing, the addition of grain crops in the garden is an exciting way to strengthen your growing prowess.

As with adding any other new crop to the vegetable patch, it is important that growers first familiarize themselves with any possible or preventable issues that may be common. This is especially true in the case of grain crops, as their susceptibility to hessian fly infestations can lead to drastic decreases in yields. Read on for more information on hessian fly management.

What is a Hessian Fly?

Hessian fly pests attack many members of the grain family, with specific interest in wheat crops. Due to its diminutive and gnat-like appearance, hessian flies often go unnoticed. While the actual adult fly is not responsible for damage done to wheat crops, the larvae (or maggots), from these flies can cause severe grain losses. This is especially true in commercial grain production.

After hatching, hessian fly maggots begin to feed on wheat seedlings. Though the maggots of the hessian fly never actually enter the stem of the plant, their feeding weakens it. In many cases, this causes the wheat (or other grains) to topple over and break at the feeding site. These broken and damaged plants are then unable to produce harvestable grains.

With the potential for such damage in the home garden and in commercial plantings, many growers are left asking how to kill hessian flies. Though little can be done once the infestation has already occurred, there are some options in regards to hessian fly management.

Hessian fly infestations can be avoided by planting varieties of grain, specifically wheat, that demonstrate some resistance to the flies. These varieties make it difficult for the adult fly to lay eggs. This, in turn, makes the plants less appealing as a host.

In addition to this, growers can follow guidelines for planting by waiting until the “hessian fly free” date has passed in their specific growing region. This date serves as a point in which activity of hessian flies has ceased in the fall, and crops are less likely to become impacted by fly larvae.