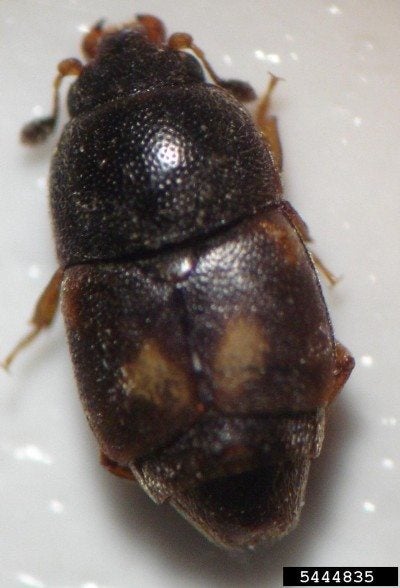 It’s not unusual to meet a bug in the garden; after all, gardens are little ecosystems that provide food and shelter for a wide range of animals. Some bugs are helpful in the garden, killing off pests; others, like the dried fruit or sap beetle, are the noxious pests — these insects damage ripening fruits and can spread fungus as they move around on plants. Let’s learn more about controlling dry fruit beetles.

What are Dried Fruit Beetles?

Dried fruit beetles are members of the insect family Nitidulidae, a beetle known for its wide host range and willingness to chew on many different garden fruits and vegetables — especially figs. Although there are several species that are problematic to gardeners, they have distinguishing features that make the family, if not the individual, easy to identify.

These pests are tiny, rarely reaching more than 1/5 inch long, with elongated bodies and short, clubbed antennae. Adults are typically brown or black, some bearing yellow spots on their backs. The larvae of the dried fruit beetle resembles a tiny grub, with a tan head, white body and two hornlike structures coming out of its end.

Sap and dried fruit beetles lay their eggs on or near ripe or overripe fruit, where larvae emerge after two to five days and begin feeding with abandon on whatever organic material is available. Larvae eat through fruits, boring holes and contaminating them. Where feeding pressure is high, larvae may infest unripe fruits as well, causing significant losses in the garden.

Adults may feed near larvae, but eat pollen or other undamaged plant parts like corn silk, causing serious damage to maturing crops. They can also vector a variety of fungi and bacteria, increasing the likelihood of spoilage on fruits where they’re feeding. Other insects may be attracted to the smell of these pathogens, including vinegar flies and naval orangeworms.

How to Treat for Sap Beetles

Since sap beetles are initially attracted to the smell of overripe fruit, sanitation is vital to sap or dried fruit beetle control. Check your garden daily for ripe produce and harvest whatever you find immediately. Remove any damaged or diseased fruits you find, both to lower the level of free-floating pathogens and to discourage sap beetles. Some species of sap beetles feed on moldy fruits, so make sure all mummies from past years are cleaned up.

Traps baited with a combination of culled fruit, water and yeast are effective if placed before fruits begin to ripen, but they need to be checked often and changed a couple of times a week. These traps will not destroy populations completely, but can help in controlling dry fruit beetles. They also allow you to monitor the colony size, so you know if the numbers of sap beetles are increasing.

When all else fails, malathion can be applied to most food-bearing crops to destroy adults. Larvae are more difficult to manage, so repeated applications may be necessary to break the sap beetle life cycle.