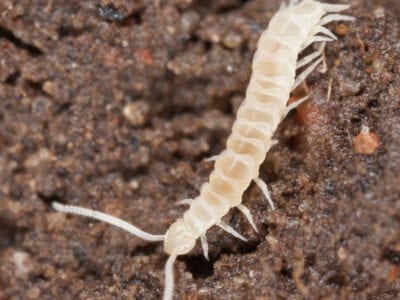 Garden symphylans are not often seen by gardeners, so when they do appear in the garden, they can be perplexing. These small white cousins to centipedes dislike light and will quickly move away from it, meaning that while a gardener may have these pests, they may be unaware of it.

What are Garden Symphylans?

What are garden symphylans and what do they look like? Garden symphylans are small– no more than a 1/4 inch (6 mm.) typically. They will be white or cream, almost translucent in some cases, with relatively long antennae. They may have up to 12 legs, but may have less. They will be flat and segmented, like a centipede would be. In fact, they look so much like a centipede, that they are frequently called ‘garden centipedes.’

Garden symphylan thrive best in heavy or organic rich, moist soil. They also must have soil that has many worms or at least worm burrows in it, as they travel through the soil in the former burrows of worms or other soil tunneling soil dwellers.

Garden symphylans are most dangerous to seedlings. They feast on new root growth and seedlings are unable to survive the attacks. They will also attack the new root growth on mature plants and, while they will be unable to kill the plant, they can weaken it, which will stunt its growth and make it susceptible to other pests and diseases.

In an open garden bed, the soil can either be treated with a soil insecticide or it can be frequently and deeply tilled. Deep tilling will destroy the burrows that the garden symphylans travel through. This will, in turn, trap them where they are and they will starve to death.

In containers where there is an infestation, you can either treat the soil with an insecticide or you can repot the plant, making sure that all of the soil is thoroughly washed away from the roots so as to prevent re-infestation. Be aware though that this kind of treatment may harm your plant so if you decide to follow this method, you should do so during dormancy or in the cooler months.