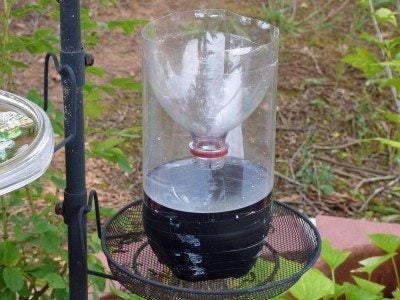 Homemade wasp trap instructions abound on the internet or you can also purchase ready-made versions. These easy-to-assemble traps simply catch the wasps and drown them. Almost any household container can be converted quickly and easily into an effective wasp trap. The best wasp traps on the market can’t hold a candle to your homemade version. Learn how to make a homemade wasp trap in this article.

Wasps are terrifying to many people who have been stung. They are, however, beneficial insects whose main job is to eat other insects. Wasps are attracted to proteins and sugars which can make those summertime picnics less than comfortable.

Sprays and baits can be helpful but generally contain toxins that may not be appropriate around your family. A safer and non-toxic way to minimize the insects is to use a little DIY wasp trap info to construct your own. Do homemade wasp traps work? The effectiveness of any trap, whether homemade or purchased, depends upon the timing used and how vigilant you are about keeping it clean.

The most efficient use of a trap is to set it out early in spring before the insects become numerous. This is because the females, or queens, are moving about in the early season. Each queen caught is estimated to represent 1,000 workers later in the season.

It is also important to keep the trap clean. The buildup of dead wasp bodies will create a raft for living wasps that get trapped. These live surfing wasps can then find their way out of the container.

Attracting the wasps to your trap doesn’t rely upon bright colors or fancy styling. Instead, wasps are attracted to sweet smells and imprint or bookmark the location of any sugary food. Even the best wasp traps are reduced to useless junk if you aren’t baiting correctly or cleaning out the dead.

How to Make a Homemade Wasp Trap

First, you will need an empty jug. Plastic is easiest to work with and it should be large enough to accommodate both several inches (8 cm.) of liquid and some flying space. A large liter soda bottle works very well.

Cut off the top of the bottle just below where the container broadens. Take the top and invert it so the spout is inside the bottle. Some homemade wasp trap instructions suggest dipping the spout into honey or jam but this may not be necessary.

Pour a few inches (8 cm.) of sugar water into the bottle. The idea is to have the insect fly in to get the sugar and not be able to fly out. If the opening is too large, use a piece of packing tape to cover it with a small punched hole just large enough for the insects to fly into.

If you are worried about attracting honeybees, add a teaspoon (5 ml.) of vinegar to the water. You can also enhance the chances of the trap working by putting a few drops of dish soap into the water. This prevents the insects from gaining any traction on the surface of the water and will speed their demise.

Wasps are more interested in protein in spring and early summer. It is only near the end of the season that their cravings for sugar spike. For early season use, you might consider the same trap build but with rotten meat in plain water inside the bottle. This will encourage early season insects to investigate your clever trap.