How To Kill Wasps – How To Eliminate Wasps From Your Yard 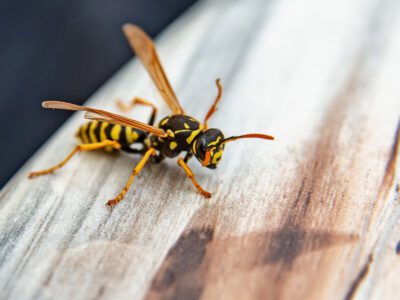 Yellow jackets, paper wasps, and hornets are the most common types of wasps that build their nests right where you don’t want them — in and around the lawn and garden. While these insects are often seen as pests due to their nasty stings, they’re actually important for the garden as both predatory insects and pollinators. However, when their nests get a little too close for comfort, like in the yard, it’s sometimes necessary to eliminate wasps to avoid any future problems that may arise.

The best way to deal with wasps is to minimize their numbers by deterring them from the area. Do not keep any food (including your pet’s) lying around. Keep drinks covered when outdoors and always ensure that garbage cans are tightly sealed. Also, keep any fallen fruits from nearby trees or shrubs, as well as in the garden, picked up as their sweet juices attract the wasps.

How to Get Rid of Wasps

If you already have a wasp problem and you need to know how to kill wasps, then it helps to understand what type you are dealing with and their particular nesting habits.

Yellow jackets, for instance, normally build their nests in the ground, and unfortunately, you may not even know they’re there until it’s too late. Nothing is worse than going out to the garden and coming back with a dozen or so stings. These aggressive wasps can also be found nesting in trees and shrubs, beneath eaves, and within other areas like wall voids in old buildings.

Hornets, too, commonly nest in trees or under the eaves of buildings.

Paper wasps, which are the least aggressive, can be found just about anywhere, building their nests under nearly any horizontal surface – including eaves, overhangs, tree limbs, and within abandoned structures.

Most of the time all of these wasps prefer quiet, out-of-the-way places. Of course, it doesn’t always seem to work out like that. This is when getting rid of wasps is our only option through the use of sprays or other means.

How to Kill Wasps

Generally, spring is the most ideal time for killing wasps, before the queen has established her colony. By late summer and fall, their nests decline as they become more interested in collecting pollen or foraging for sugary sweets. If the nest is large or you’re dealing with the more aggressive types, like yellow jackets and hornets, you may want to call in reinforcements (professionals) to handle the job. Otherwise, you can grab the can of wasp and hornet spray and following label instructions, spray the insecticide into the nest entrance or saturate the paper wasp nest during evening hours when the wasps are less active.

In addition to regular wasp spray, some people also use WD-40. However, when killing wasps in a plant (such as a tree or shrub), this isn’t always practical. That’s when using a home remedy to remove a wasp nest is necessary. For aerial nests, cover with a trash bag and seal it shut. Cut the nest from the tree and leave it in the sun the next day or freeze it to kill the wasps inside.

For those in the ground, pour a soapy solution (preferably hot) down the entrance and then seal it off with dirt or a large boulder. Keep in mind these usually have two entrances, so locating the back entrance is a good idea before you start. While not really earth-friendly, pouring paint into the nest may also be successful in eliminating these pests.