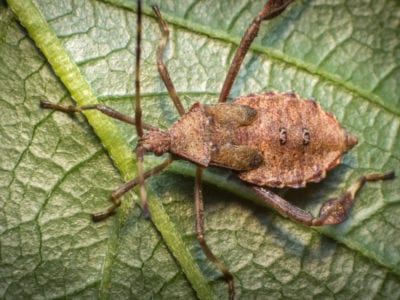 Squash bugs are one of the most common pests affecting squash plants, but also attack other cucurbits, like pumpkins and cucumbers. Both adults and nymphs can literally suck the life right out of these plants, leaving them to wilt and eventually die if not controlled.

Squash bug identification is relatively easy to recognize. The adult bugs are approximately 5/8 inches (2 cm.) long, have wings, and are brownish black in color with some gray mottling. When crushed, they will give off an undeniably foul odor as well.

The nymphs are usually a white to greenish gray color and have no wings, though they do have legs. On average it takes about four to six weeks for them to mature into adult squash bugs. You will find their eggs on the undersides of leaves up until about midsummer and both the adult and nymph bugs can be seen clustered together near the base of plants beneath foliage. They may also be found along the vines and unripe fruit.

Young plants are generally more susceptible to their damage, and if you don’t get rid of squash bugs, young plants will die. The larger plants are usually more tolerant, though squash bug control may still be necessary. Once plants have been attacked by these pests, their foliage may become spotted and begin turning brown. Wilting is also evident, after which both the vines and leaves turn black and crispy.

How to Kill Squash Bugs

When controlling squash bugs, early detection is important. In large numbers, they are more difficult to kill and will cause significant damage. Collecting and destroying the bugs and their eggs is the best method of control.

You can create a squash bug trap by laying out cardboard or newspaper around the plants. The bugs will then gather in groups beneath this during the night and can be easily collected in the morning, dropping them into a pail of soapy water.

Squash bugs tend to be tolerant of pesticides, so using pesticides may not reduce the population. Due to this, insecticides are not usually necessary for squash bug control unless large numbers are found. If this is the case, you can apply carbaryl (Sevin) per the instructions, with repeated applications as needed. Neem oil is also effective and a safer alternative to most other types of pesticides. The best time to apply any pesticide would be early morning or late evening. You’ll also want to make sure to cover the undersides of leaves thoroughly.