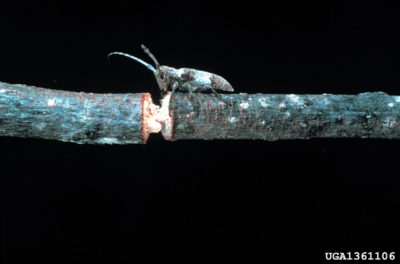 What are Twig Pruner Beetles?

These little insects belong to a family of beetles called “longhorns.” They get their family name from their antennae, which are slightly longer than their half-inch (1.5 cm.) bodies. It’s the beetle’s larvae that damage trees.

The grubs look like small, white caterpillars with yellowish hair covering their bodies, and they feed inside the twigs. Once the twigs are hollowed out, the next strong wind breaks them off and they fall to the ground. The larva remains in the fallen twigs where it will eventually pupate and emerge as an adult.

Locating and identifying adult twig pruner beetles is a challenge, but the larvae are easy to find. If you have fallen twigs around the base of a tree, pick them up and look closely at the cut ends. If you see an oval chamber packed with fecal matter that resembles sawdust, you can bet that breaking apart the twig will reveal little grubs. Fallen twigs with oval chambers are diagnostic of twig pruner beetles.

Twig pruner beetle control is easy—just pick up and destroy the twigs that litter the ground. Since the life cycle is completed inside the fallen twigs, eliminating the litter interrupts the twig pruner beetle’s life cycle so that they never have a chance to mature and reproduce. In addition, the beetle has several natural enemies that help destroy them at the larval stage.

Although you may be alarmed at the sudden appearance of numerous twigs on the ground around your tree, rest assured that twig pruner beetle damage is not severe. The loss of the twigs does no permanent damage, and you soon won’t be able to tell there was ever a problem. You’ll never need to resort to the use of toxic insecticides to control the insect.