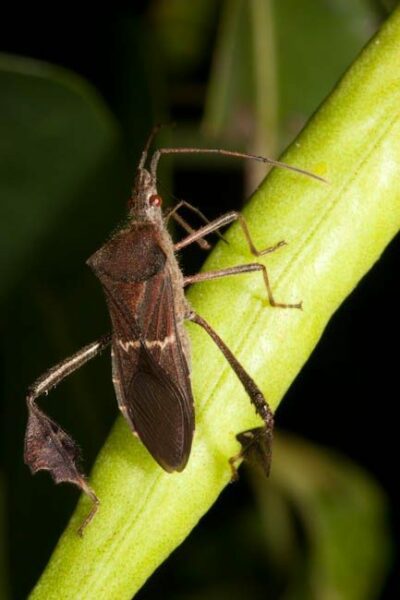 There are lots of interesting insects in the garden, many that are neither friend nor foe, so we gardeners mostly ignore them. When we find leaf footed bugs in gardens, it’s hard to know what to think. These stinkbug relatives have a peculiar look about them and they spend way too much time near our prized fruits, but they rarely break the top 10 worst garden bugs. Don’t worry, we’ve got the dirt on the leaf footed bug so your next encounter can be a much more enlightened one.

What are Leaf Footed Bugs?

Leaf footed bugs are medium to large sized insects in the genus Leptoglossus. Although they differ widely in coloration, each shares a distinctive trait: leaf-shaped plates located on the lower sections of both back legs. Leaf footed bugs tend to be shaped similarly to stink bugs and appear in drab colors like tan, gray, brown, and black once they reach adulthood.

Nymphs are elongated with abdomens that come to a point toward the end, often in bright colors like orange-red and with dark legs.

Most of the time, there’s no reason to worry too much about these insects. Leaf footed bug damage is very limited in the home garden, and they rarely appear in sufficient numbers to do more than minor cosmetic damage to fruits and ornamental plants. These creatures will feed on a wide range of plants, but they do the worst damage to nut and fruit-bearers, like almonds, pistachios, pomegranates, and citrus.

Due to their typically “barely harmful to only mildly annoying” rating on the garden insect scale, leaf footed bug control is not a big concern. Cultural practices like hand-picking nymphs from inside protected plant spaces and keeping weeds mowed down are a great way to discourage and destroy the bulk of populations.

Groups of nymphs may be successfully doused in insecticidal soap, but you should avoid chemical insecticides as much as possible to preserve the natural enemies of these bugs.

Leaf footed bug populations are rarely problematic, but keep an eye out after a mild winter, since adults have a tendency to winter over unless it gets very cold. In these years, it may help to shield your sensitive plants with row covers as soon as possible to prevent huge groups of leaf footed bugs from laying eggs and feeding upon them.