Learn More About Burr Medic And Its Control 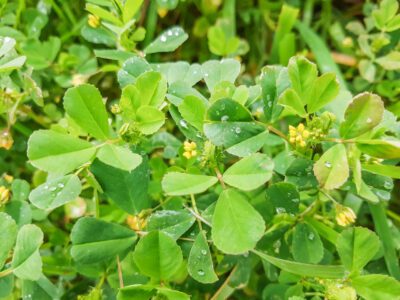 If your lawn is filled with prickly burrs, you likely have burr weeds. With a little vigilance, however, it is possible to control burr medic and improve the health of your lawn. Read on to learn more.

What is Burr Medic?

Burr medic (Medicago polymorpha), also known as burr weed, is a type of trifoliate weed that can quickly spread throughout the lawn and garden if not controlled.

You can recognize this weed by its green serrated leaves and reddish purple colored stems that creep closely along the ground. It also has small yellow flowers. After flowering, the tiny green pods produce prickly burrs. These will eventually dry up and turn brown, spreading seeds everywhere.

Burr medic germinates in fall and winter, and flowers in spring.

There are several types of burr weeds, most of which can be found growing in a wide range of conditions and soil types. However, burr medic seems to favor poor soils, such as heavy clay. Like other trifoliate weeds, such as clover, burr weed has leaves that are grouped together in threes.

Other burr species include:

How to Kill Burr Medic

Since burr medic spreads and reproduces by seed, the best way to control the weed is to remove it before it has a chance to set its seed, even better before it flowers.

While burr medic can be controlled with regular mowing, this will not kill the weed. It is also tolerant of most herbicides, though non-selective types can help kill the plant as well as boiling water. Neither of these, however, will kill the burrs that are left behind in the lawn or garden.

Therefore, you may want to use an old woolen blanket to drag over the area first, which should snag most of these burrs. Then the area can be treated with a pre-emergent, such as corn gluten meal, to prevent germination of any seeds left behind. Late summer or early fall is a good time to do this.

The use of broadleaf post-emergent weed killer, like Weed-B-Gone, prior to flowering (winter/early spring) can help as well.

Once burr medic has been eradicated, you’ll want to improve the health of your soil to minimize its return by amending it with organic matter or compost.