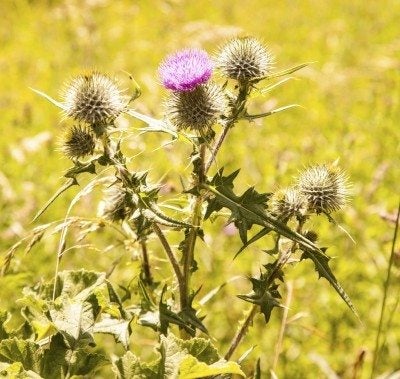 Beautiful but treacherous, the Scotch thistle is the bane of farmers and ranchers everywhere– but it can also make a huge mess in your home garden. Find out what to do about these plants in this article.

Scotch thistle plants (Onopordum acanthium) boast amazing blooms atop their towering stems, but this invasive species has become a menace to livestock across the country. Its ability to act as a living barbed wire, preventing cows, sheep, and other animals from reaching valuable water sources, has earned the title of noxious weed in most states. Even though it’s not as big of a problem for home gardeners, managing Scotch thistle in your landscape is important in the battle against this troublesome plant.

Although it’s a familiar plant to anyone living in a rural area, Scotch thistle is actually an import from Europe and Asia, used as an ornamental plant in the 19th century. Those early gardeners had no idea the trouble they would unleash with their pretty thistles. The adaptability of this plant is one of its most frightening features. For example, the life cycle of Scotch thistle can change based on the climate, so it may be an annual in one area, but a biennial or short-lived perennial in others.

Positive identification of a Scotch thistle is easy – the sharp-edge, hairy leaves are a dead giveaway. Rosettes of leaves can reach up to 6 feet (2 m.) across and stems may grow from 6 to 8 feet (2 m.) tall. The breathtaking, globe-shaped purple flowers are loved by many, but the seeds they produce can survive in the soil for up to 20 years. Considering that plants produce up to 40,000 seeds, that can create a pretty serious infestation for a long time.

As much as Scotch thistle information makes them out to be true monsters of the plant world, they’re surprisingly easy to control in a small scale, which is typically how you’ll find them in the home garden. A few Scotch thistles won’t put up much of a fight, but make sure if you cut them down once they’ve started flowering to burn or bag that flower.

Unlike most plants, Scotch thistle flowers can produce ripe seeds even after being severed from the stem.

The best time to treat Scotch thistle is when it’s still just a rosette on the ground, then a thorough coating of weed killer is all you need. If you’re not ready to break out the herbicide, or your Scotch thistles are in a delicate area, you can hand dig them. Just be sure to wear thick gloves to protect against their sharp thorns.