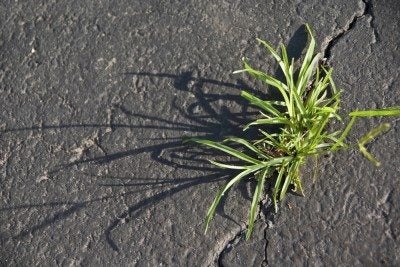 The methods on how to treat weeds in cracks include futile pulling and much more effective pavement weed killers in the form of chemical and natural formulas.

Types of Weeds in Pavement

Any home or property owner knows the battle. Weeds growing in pavement cracks are an all too common problem and create a constant war with these unwanted plants. You can spray all you want, but the pests will be back next season and spring out of holes and fissures. Weed control on the pavement is a necessary exercise but also an ongoing struggle to gain power over these hardy and adaptive plants.

The attack of weeds begins when their seeds find a hospitable habitat. Breaks in sidewalks and concrete areas collect detritus that compost and provide nutrients for seeds that drift on into these areas. Some of the more aggressive species are dandelions, thistle, and sticker weed.

Even normally desired plants, such as rhubarb and some berries, will slide along into the splits in the pavement, using such chinks as natural growing areas. Yarrow, pigweed, gumweed, and flowering prickly lettuce are other weed species that thrive in the gaps of pavement.

The adaptability of weed species is to their advantage and the home owner’s loss. Let the games begin.

How to Treat Weeds in Cracks Naturally

Concentrated vinegar is one of the best methods you can use if you wish to avoid chemicals. Highly concentrated horticultural vinegar will work on many broadleaf species. Household vinegar is not strong enough to do more than kill the leaves, which will over time reduce the vitality of the plant but must be applied several times to keep the leaves from forming and producing plant sugars.

Weeds with deep taproots, such as dandelions, are not as easily removed with vinegar, as the roots can reach nutrients deep down in the soil. Consistent pulling may also have an effect on some weed species but if you can’t get the entire root, many varieties will simply sprout anew.

Weed control on pavement cracks that are slim is the most difficult of all because pulling generally leaves behind the roots.

The use of herbicide is one of the best ways to kill the roots of weeds in the pavement. There are several formulas to purchase that target different types of weeds. Brush and berry plants require the strongest formula available, but be cautious, as these are not necessarily selective and any nearby plants can be affected by drifting spray.

Weeds growing in pavement cracks may require a secondary application of even chemical formulas. Read and follow the directions on the product carefully, as many of these chemicals are dangerous to humans, animals, and invertebrates, as well as non-selected plants.