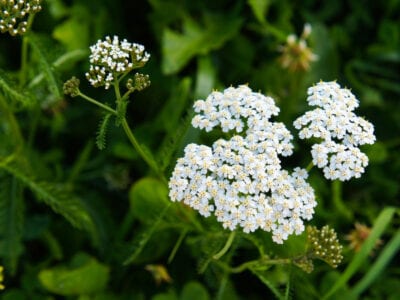 Yarrow, a perennial plant with feathery leaves that may be both a blessing and a curse in the home landscape, is often called yarrow weed. Ornamental or common yarrow is not native, but Western yarrow is indigenous to North America. Both have a spreading habit and extremely tolerant, hardy natures. It’s the spreading habit that is of most concern to homeowners. Once the plant is in your yard, it’s there to stay and it can be very difficult to remove yarrow.

Yarrow is a low-growing plant that produces flower stalks four times its foliage height. The plant is recognized by the feathery, almost fern-like, green foliage. Each leaf is between 1 and 6 inches (2.5-15 cm.) long. Each plant can produce several flower stalks covered by fine hairs.

Flower heads are borne in corymbs or umbrella shaped clusters. Each flower has five colored flowers surrounding 10 to 20 pale yellow florets. The flowers are commonly white or soft pink but now come in yellows, coral, and red.

Is Yarrow an Invasive Weed?

The answer to that question is complex but really boils down to opinion. Many people appreciate the easy care nature of yarrow and there are several new cultivars that are introducing new colors and sizes to the home landscape. Yarrow produces season-long umbrella shaped flower clusters that enliven the garden. There are also those who find the plant colonizing entire beds and even the grass. That would classify it as an invasive weed. In these gardener’s minds, yarrow control is paramount.

Yarrow is an extremely adaptable plant. It can grow on any soil and in many conditions. It spreads from its rhizomes. When the plant is disturbed any small piece of rhizome can become a whole new plant. The clustered flowers on their 3 foot (1 m.) tall stalks produce thousands of seeds. The tiny seeds spread by wind and can remain viable in soil for up to nine years. The longevity of the seeds makes complete yarrow control impossible.

How to Remove Yarrow

It’s much nicer to use the term yarrow control but the goal is the same– to eliminate yarrow plants. Digging and hoeing areas where yarrow has spread can remove some of the rhizomes but mechanical control is only effective if it goes down 12 inches (31 cm.) and removes every speck of yarrow weed. Providing superior care to the lawn will make it thick and prevent some of the spread of the pest.

There are several chemicals available for killing yarrow. They must be used during the period of growth from spring to autumn. Dicamba, chlorsulfuron, clopyralid, MCPA, triclopyr, and 2,4D are all listed as useful for yarrow control by the University of Illinois. Yarrow will require several treatments over the growing season, so it’s best to define the problem early and apply controls as soon as possible. Remember to follow all precautions listed by the chemical manufacturer.