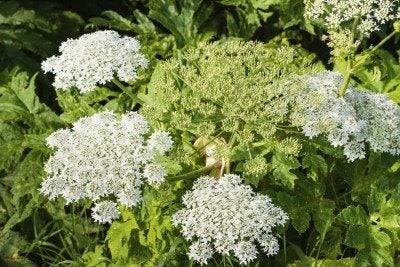 Giant hogweed is one scary plant. What is giant hogweed? It is a Class A noxious weed and is on several quarantine lists. The herbaceous weed is not native to North America but has heavily colonized many states. Public and private landowners in most states are required to implement giant hogweed control. This can be dicey business, as the plant’s sap can spray 3 feet (1 m.) from the weed and contains toxins that cause photo dermatitis, a painful and long-lasting condition.

What is Giant Hogweed?

Giant hogweed (Heracleum mantegazzianum) is native to Asia and was introduced as an ornamental plant. The weed’s massive size and huge 5 foot (1.5 m.) compound leaves make it an impressive specimen. Add to that over 2 foot (61 cm.) wide umbels of white flowers and characteristic purple mottled stems, and you have a plant that just begs to be viewed. However, giant hogweed information tells us that the plant is not only a rampantly spreading invasive species but a potentially dangerous plant too.

The plant is an herbaceous perennial plant that closely resembles our native cow parsnip. The weed can grow 10 to 15 feet (3-4.5 m.) in one season and is a most striking species. It has thick stalks with purple spotting and huge deeply notched leaves with bristles and pustules. The plant flowers May through July and has large umbrella-shaped clusters of tiny flowers.

Any giant hogweed information should include the facts about its toxic nature. This plant is nothing with which to fool. Photo dermatitis from contact with the sap can cause deep, painful blisters within 48 hours. The blisters can persist for weeks, and scars last for months. The condition causes long-term light sensitivity and blindness can occur if sap gets in the eyes. For these reasons, controlling giant hogweed plants is imperative to safety.

Where Does Giant Hogweed Grow?

Giant hogweed is native to the Caucasus Mountains and southwestern Asia. It has become a widespread weed and a public health hazard. Where does giant hogweed grow in North America? Practically everywhere, but its primary habitats are ravines, roadsides, vacant lots, backyards, stream sides, woods, and even parks.

The plant produces numerous seeds, which establish readily in many types of soil. The plant is shade tolerant and drought resistant, making it a tough competitor to native wild flora and very difficult to eradicate. It even has perennating buds at the crown that store nutrients during unfavorable conditions and burst into new plants when conditions improve.

Controlling giant hogweed plants is difficult due to the problems of handling the weeds. Mechanical removal of the plant is effective but potentially dangerous. Wear goggles, gloves, and long sleeves and pants when pulling the weed.

Removal should be done before seed heads form. Dig up the plant carefully, making sure all parts of the roots are removed. Any bit of the plant has the potential to release sap, so keep water and eye wash on site as removal occurs.

There are some recommended chemical controls for the plant. Consult your local extension office for information on what is advised for your area. Non-chemical control has been shown with pigs and cattle, which seem to be able to eat the plant without any harm.

Wash any equipment you might use thoroughly as well as your clothing once removal is accomplished. If you are exposed to sap, wash the area completely with soap and cold water. Avoid sunlight after contamination. Use topical steroids to control pain and discomfort. If blisters persist, consult your doctor for further treatment.