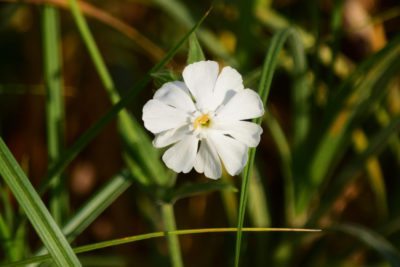 It has pretty flowers, but is white campion a weed? Yes, and if you see flowers on the plant, the next step is seed production, so it’s time to take measures to control it. Here is some white campion info that will help you if this plant has appeared on your property.

What is White Campion?

White campion (Silene latifolia syn. Silene alba) is a broadleaf plant (dicot) that first grows in the form of a low-to-the-ground rosette. Later, it bolts and produces 1 to 4 foot (0.3-1.2 m.) tall, upright stems with flowers. The leaves and stems are both downy.

White campion is native to Europe and was probably introduced into North America in the early 1800’s. Besides being an annoying weed, white campion can also host viruses that affect spinach and beet plants. It commonly grows on farms, in gardens, alongside roads, and on other disturbed sites.

White campion is related to other plants known as campions, cockles, or catchflys and to the garden flowers known as pinks. Like bladder campion, a wildflower that’s sometimes seen growing as a weed, the flowers consist of a balloon-shaped calyx (a structure made of the flower’s sepals) from which five petals emerge. This weedy species though has downy leaves and stems with small white petals. It can grow as an annual, biennial, or a short-lived perennial.

How to Control White Campion Weeds

Each white campion plant can produce 5,000 to 15,000 seeds. In addition to spreading by seed, detached pieces of root can grow back into full plants, and the plants can spread underground using the root system. Controlling white campion is, therefore, similar to controlling dandelions and similar herbaceous weeds. The most important control methods are to remove the root system and to prevent the plants from going to seed.

Pull out the plants before you see flowers or at least before the flowers start to fade. White campion produces a taproot, or a long, plunging main root, plus lateral (side) roots. You will need to remove the entire taproot to prevent the plant from growing back. Tilling or mowing can be used to greatly reduce populations of this plant on farms or in lawns.

Herbicides are typically not necessary, but if you use them, choose those effective against dicots, and apply them before flowers appear. White campion is tolerant to 2, 4-D, but glyphosate is typically effective against it. That being said, chemical control should only be used as a last resort, as organic approaches are safer and much more environmentally friendly.