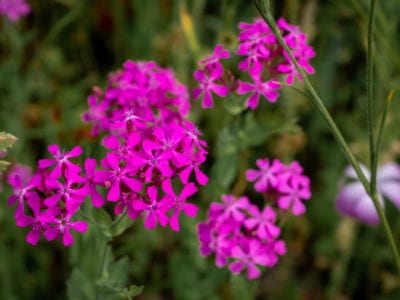 Catchfly is a plant native to Europe, which was introduced to North America and escaped cultivation. Silene armeria is the plant’s grown-up name and it is a perennial in USDA plant hardiness zones 5 to 8. Silene doesn’t perform well in sweltering heat and it can only be considered an annual in colder zones.

Catchfly perennials are most suited to moderate weather in full to partial sun. Campion is another common name of Silene, which is also called sweet william catchfly plant. This flowering perennial will spread and add a swath of color to your garden.

Silene is a genus of flowering plants with approximately 700 species. Many of these are attractive for the gardens of the Northern Hemisphere. Commonly found forms, such as the sweet william catchfly plant, provide easy-to-care for carpets of flowering mounds.

For some odd reason it is also referred to as none-so-pretty, which seems rather unfair. The plant flowers from May to September and comes primarily in tones of pink but may also be in white and lavender. The plant’s extended blooming period makes growing Silene armeria ideal for any landscape. Catchfly perennials are low-growing plants with exceptional drought tolerance.

Sweet william catchfly is a bright pink perennial in moderate climates that forms a 12 to 18-inch (30 to 45 cm.) tall mat of foliage and flowers. It is called catchfly because of the white sticky sap that oozes from damaged parts of the stems, which snares small insects. Leaves rise up from stiff stems and have small gray green to silver hues. The half-inch (1.25 cm.) blooms sport rounded petals on a flat long-lived flower. The Pacific Northwest and parts of the moderate western states provide the best climate for growing Silene armeria.

How to Grow Catchfly

Provide even moisture as the plants mature. Once they are planted outside and established, infrequent watering is fine, but during high heat and dry periods the plant’s moisture needs increase.

Catchfly perennials may self-seed and spread in moderate climates. If you don’t want the plant to spread, you will need to deadhead before blooms form seed.

The plants benefit from a 1 to 3-inch (2.5 to 7.5 cm.) layer of mulch spread around the root zone to protect them in short freeze periods. Pull the mulch away in spring to allow new growth to emerge.

As with any plant, catchfly plant care must include watching for pest and disease problems. Catchfly perennials have no significant issues in these areas but it’s always best to nip problems in the bud in the event they arise.

Provided you situate the plant in full sun to partial shade with well drained soil that has good nutrient value, growing Selene armenia in your garden provides a low maintenance, consistent show of color.