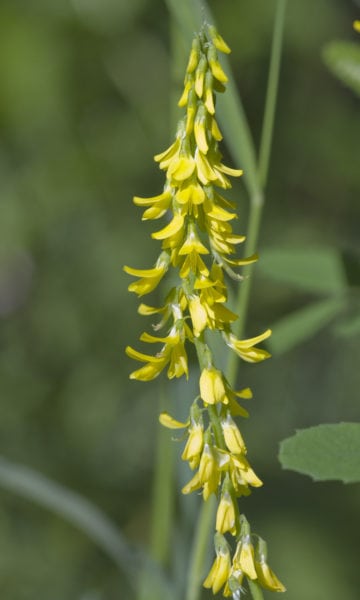 Yellow sweetclover is not a native plant to this country but was imported from Europe and Asia. It is used as food livestock and as hay when it is young. After the plant flowers, it becomes stemmy, which makes it problematic as hay. An even more serious problem with sweetclover is the fact that it contains the toxin coumarin. This gives the legume a bitter taste.

Yellow sweetclover becomes more toxic when heated or spoiled. If eaten in this stage, it reduces an animal’s blood-clotting ability and can be lethal. That’s why controlling yellow sweetclover is important.

Why Is Yellow Sweetclover a Weed?

In many areas, yellow sweetclover is considered a weed. That’s because it spreads rapidly and often grows where it isn’t wanted, like open fields, roadways, and other disturbed sites. The seeds can remain viable for 30 years or more.

There are many beneficial yellow sweetclover uses, however. This plant provides food for wildlife and also nectar for honeybees. It is also a nitrogen-fixing plant used as a cover crop and, as mentioned, works as feed for livestock.

That being said, the low-level toxicants contained in the plant can be dangerous for animals, both livestock and wildlife. Feeding on moldy yellow sweetclover can cause a fatal hemorrhaging disorder.

Yellow sweetclover plants are drought-tolerant and exceptionally cold tolerant. They propagate by seeds and produce a lot of them. If you are interested in controlling yellow sweetclover, it’s best to act before the yellow flowers bloom.

Remove the plants early, before seeds are formed. This is the key to yellow sweetclover management. How to remove them? Hand pulling works well, if you don’t have acres to deal with. Mowing also works for larger areas, and controlled burns can help with controlling yellow sweetclover.

What about controlling yellow sweetclover when it is mature? At this stage, you’ll have to remove the seeds. That is more difficult since the seeds are tough and durable. They resist soil fumigation as well as solarization.