Safer Alternatives To Roundup – How To Kill Weeds Without Roundup 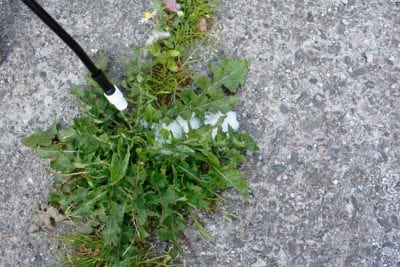 The use of chemical weed control is surrounded by uncertainties and debate. Are they safe to use? How will they affect the environment? Do they pose a threat to humans? All of these are important issues to consider BEFORE using them in the garden. As of late, the use of Roundup and its effects has been at the forefront of discussion. Are there safer alternatives to Roundup for weeds in the garden? There are. Read on for more information.

Roundup and other herbicides containing glyphosate are effective system herbicides that kill many types of annual and perennial weeds and, if used as directed, are not supposed to harm nearby plants.

Although the Federal Food and Drug Administration (FDA) claims that Roundup is safe when used as directed, there are growing concerns about the herbicide’s toxicity, and with good reason. Studies indicate that glyphosate may be harmful to the environment and to aquatic life if it reaches streams and waterways.

Others claim that the herbicide may be linked to infertility, immune problems, autism, Alzheimer’s disease, low testosterone levels, certain types of cancer, and other serious health conditions.

Unfortunately, weed control without glyphosate can be difficult. Even pulling and hoeing are less than successful against weeds that spread via underground runners, or those with long taproots. That being said, there are a few possible alternatives to Roundup in the lawn and garden that can knock a dent in your weed control battle.

How to Kill Weeds Without Roundup

It may be more of a challenge to eliminate those pesky weeds without the use of chemicals, but the peace of mind it brings is worth the extra trouble. So, if you’re stuck wondering what to use instead of Roundup, here are a few ideas that may help:

Flamethrowers: Although they have long been used in agriculture, flamethrowers, also known as flame weeders, are becoming more widely used by gardeners who are seeking alternatives to Roundup. Flamethrowers are effective against many types of weeds in certain areas, such as in gravel driveways or sidewalk cracks.

Flame weeders should never be used where any fuel is nearby, including dry grass or weeds or flammable mulch. Repeat applications may be needed for large weeds.

Organic weed killers: Gardeners have access to a growing number of organic weed killers containing a combination of ingredients such as clove oil, citrus oil, lemon juice, or vinegar. Manufacturers claim the products are safe for people and pets, and that no safety gear is needed. However, users should read the label carefully before using it.

Vinegar: Typical household vinegar isn’t strong enough to do much good against tough, well-established weeds, but some gardeners swear by horticultural or industrial vinegar, which has an acetic acid content of 20 to 30 percent. Vinegar this powerful isn’t without risks, however. Be sure to wear goggles and protective clothing, as the vinegar can burn the skin and eyes. It can also harm frogs and toads that take refuge in dense shade.

Although regular household vinegar may not pack enough punch to control weeds, adding a little salt may make vinegar more effective, while a few drops of liquid dish soap will help the vinegar stick to the leaves.

Essential oils: Glyphosate alternatives such as peppermint, citronella, pine, and other essential oils may burn the foliage, but they probably won’t affect the roots. Pet owners should study up on essential oils before trying this weed control solution. Many essential oils are toxic to cats and dogs, and some may be fatal. If you have pets and choose this method of control, keep them put up.

Corn gluten: A byproduct of corn starch processing, corn gluten is a dry powder that is safe for people and the environment. The problem, however, is that while corn gluten may slow development of new weeds, it doesn’t have much impact on weeds that are already established.