Dodder Weed Control: How To Get Rid Of Dodder Plants 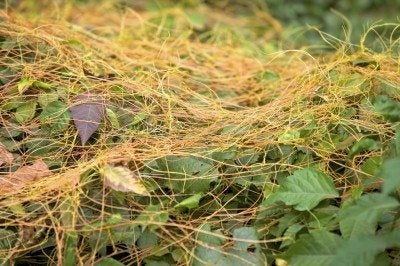 Dodder weed control and management is of paramount importance to many commercial crop growers. A parasitic annual weed, dodder (Cuscuta species) afflicts many crops, ornamentals, and native plants virtually decimating them. How to get rid of dodder is an ongoing quest for the commercial farmer and may be of interest to the home gardener as well.

Dodder weed has thin, twining stems either pale green, yellow, or bright orange in color. It is either leafless or with tiny, triangular leaves. The weed bares cream-colored bell-shaped blooms containing a seed capsule with two to three seeds.

The rootless seedlings have a limited ability to photosynthesize and rely on the host plant to provide them with energy. A dodder seedling can live five to ten days without a host but will soon die. As the dodder weed grows, it continually reattaches itself to its host and sends out shoots to attach to nearby hosts as well creating a dense mass of intertwined stems.

Seeds are generally dispersed via the movement of soil and equipment or in dirt clinging to shoes and tires, or in infested plant material that is being transported. The seed germinates at or near the soil surface in the spring when temps reach 60 degrees F. (15 C.). Upon emergence, the seedling is dependent upon carbohydrates stored in the seed until they attach to a host. Once attached, dodder plant extracts nutrients and water from the host, predisposing the host to disease and insect invasion, affecting fruit set and yield, and even killing off the host.

As previously mentioned, dodder is a parasitic weed. It emerges as a rootless shoot that must attach itself to a host within a few days. It embeds its suckers, or haustoria, into the stem of the host plant, literally sucking the life out of the host. If left unchecked, dodder can form large colonies of several feet (1 m.) across and wipe out such crops as:

Dodder is in the Cuscutaceae family, although it is sometimes included in the family Convolulaceae or morning glory family. More than 150 species of dodder occur across the globe, but it is most prevalent in the Americas. With such variety, it can be found in almost any landscape, including salty marshes, mud flats, or ponds. Some species thrive in weed fields living off of such plants as bindweed, lambsquarters, and pigweed.

How to Get Rid of Dodder

If you live in California where the invasive Japanese dodder has infiltrated itself, you need to contact your county agricultural commissioner or local extension office for assistance in identification and help with control. The rapid spread of this weed has it under an eradication program in California.

Otherwise, you are most likely dealing with native dodder weed and efforts to control this weed require a systematic approach involving multiple methods. Dodder weed control requires immediate attention before the invasion is out of control. Dodder control methods will incorporate control of the current populations, prevention of seed production, and suppression of new seedlings.

You can also remove host plants and replant with those plants proven to be inhospitable to dodder weed such as grasses, lilies, crucifers, legumes, or transplanted trees or shrubs.

Remove small infestations of dodder by hand and manage large ones with mowing, pruning, burning, or spraying herbicides to thwart seed production. Prune host plants 1/8 to 14 inch (5 mm. to 36 cm.) below the point of attachment. Be mindful of equipment and clothing when moving from infested to uninfected areas, as the seeds may cling to them and be transported.

Chemical control is not usually necessary for dodder management in the home garden. Hand removal and pruning are usually sufficient to control the weed. In areas of large infestations, a pre-emergent herbicide may be used followed up by close mowing, burning, or spot removal of afflicted host plants.