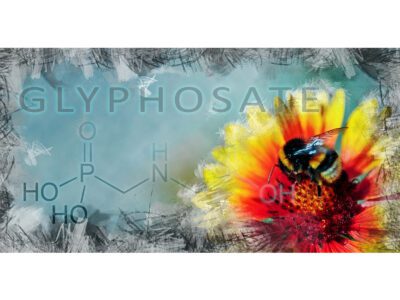 You may not be familiar with glyphosate, but it is the active ingredient in herbicides such as Roundup. It is one of the most commonly used herbicides in the U.S. and has been registered for use since 1974. Is glyphosate dangerous though? There has been one major case to date where a plaintiff was awarded a large settlement because his cancer was found by the court to have been caused by glyphosate use. However, this doesn’t give us the full story regarding potential glyphosate dangers.

There are over 750 products available in the United States that contain glyphosate, with Roundup being the most widely used. The way it works is by preventing a plant from making certain proteins that it needs for growth. It is a non-selective product that is absorbed in plant leaves and stems. It does not affect animals because they synthesize amino acids differently.

Glyphosate herbicide products can be found as salts or acids and need to be mixed with a surfactant, which allows the product to stay on the plant. The product kills all parts of the plant, including the roots.

In 2015, studies into human toxicity by a committee of scientists working for the World Health Organization (WHO) determined that the chemical is likely carcinogenic. However, earlier WHO studies on potential glyphosate dangers in animals found no correlation between glyphosate and cancer in animals.

The EPA found it is not a developmental or reproductive toxin. They also found that the chemical is not toxic to the immune or nervous system. That said, in 2015, the International Agency for Research on Cancer (IARC) classified glyphosate as a carcinogen. They based their conclusion on the findings of several scientific studies, including an EPA Scientific Advisory Panel report (source: https://beyondpesticides.org/dailynewsblog/2015/03/glyphosate-classified-carcinogenic-by-international-cancer-agency-group-calls-on-u-s-to-end-herbicides-use-and-advance-alternatives). It also states that the EPA originally classified glyphosate as a possible carcinogen in 1985, but later changed this classification.

In addition, many glyphosate products, such as Roundup, have also been proven to be harmful to aquatic life once finding their way into rivers and streams. Some of the inert ingredients in Roundup have been proven to be toxic. Also, glyphosate has been shown to harm bees.

So where does this leave us? Cautious.

Information on Glyphosate Use

Due to uncertainty, many regions are actually banning or limiting use of the chemical, particularly on play grounds, around schools, and in public parks. In fact, the state of California has issued a warning about glyphosate and seven cities in C.A. have banned its use altogether.

The best way to minimize any dangerous effects is to follow precautions when using glyphosate products. Each product will come with detailed information on glyphosate use and any hazard warnings. Follow these carefully.

Additionally, you should practice the following precautions:

While traditional hand pulling of weeds is always the safest method of control, gardeners may not have the time or patience necessary for this tedious garden task. That’s when alternatives to using glyphosate, such as natural herbicides, should be considered – like BurnOut II (made from clove oil, vinegar, and lemon juice) or Avenger Weed Killer (derived from citrus oil). Your local extension office can provide more information as well.

Other organic options may include the use of vinegar (acetic acid) and soap mixes, or a combination of the two. When sprayed on plants, these “herbicides” burn the foliage but not the roots, so reapplication me be necessary. Corn gluten makes a good alternative for preventing weed growth, though won’t be effective on existing weeds. The use of mulch can also help limit weed growth.