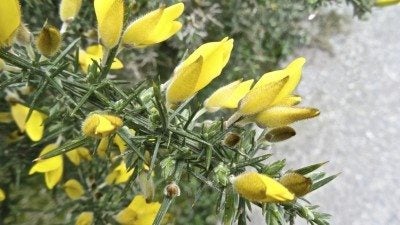 What is a gorse bush? Gorse (Ulex europaeus) is an evergreen shrub with green leaves shaped like conifer needles and brilliant yellow flowers. Flowering gorse shrubs are important in nature since they provide shelter and food for many insects and birds. However, gorse is a tough, tenacious shrub that spreads quickly and can become invasive. Read on for more gorse bush facts and information on gorse control.

What is a Gorse Bush?

If you ever tumble into a gorse bush, you will never forget it. What is a gorse bush? Gorse is a spiny, evergreen shrub native to the Mediterranean. Gorse was brought into the United States as an ornamental in the 19th Century.

Gorse bush facts suggest that the shrub is a legume, a member of the pea family. Flowering gorse shrubs can grow tall and wide. Specimens grow to 15 feet (5 m.) in height with a spread of 30 feet (9 m.). They form compact shrubs, sufficiently dense and spiny to create an impassable hedge.

The bright yellow, coconut-perfumed flowers take the shape of pea blossoms and grow at the end of the gorse branches. The mature branches have conspicuous spines.

The three principal species of flowering gorse shrubs are: common gorse, Western gorse, and dwarf gorse. Common gorse flowers from January to June, while the others flower in late summer and fall.

Flowering gorse shrubs, and especially common gorse shrubs, can be difficult to control. One reason is that gorse propagates easily.

The plant produces abundant seeds that remain viable in the earth for up to three decades. If land is cleared or burned, the seeds are stimulated to germinate. Gorse colonizes these sites and forms thick, spiny stands very difficult to eradicate.

Given these gorse bush facts, it is easy to understand that gorse control is difficult, especially when the plant has developed into impenetrable stands. Flowering gorse shrubs choke out native plants, reducing diversity and degrading wildlife habitat.

Common gorse stands are real fire hazards. The foliage burns very easily, partly because the dead, dry foliage – very flammable – collects within the stands and at the base of the plants.

Established colonies of gorse are very difficult to remove. It’s easier to prevent the formation of stands by pulling out young plants when they first show up on your property.

You can fight back against gorse stands by mechanical control – that is, cutting the plants down and pulling them out by the roots. You’ll have more success if you combine this with chemical control.