What Is Hemp Dogbane: How To Get Rid Of Dogbane Weeds 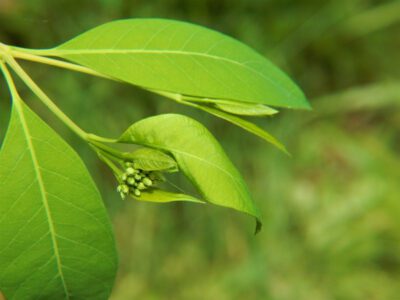 Hemp dogbane weed is also known as Indian hemp (Apocynum cannabinum). Both names refer to its one-time use as a fiber plant. Today, it has quite a different reputation and is something of a scourge in certain regions of the country. What is hemp dogbane and why do we want to get rid of it? The plant is poisonous to animals with a toxic sap and has roots that can burrow 6 feet (2 m.) into the earth. It has become an agricultural pest which makes dogbane control important, especially in commercial garden regions.

What is Hemp Dogbane?

In a perfect world, all life would have its place on earth. However, sometimes plants are in the wrong space for human cultivation and they need to be removed. Hemp dogbane is a good example of a plant that is not beneficial when growing in cropland and can do more harm than good.

It will crowd out the intended crops and establish itself as a creeping perennial that is difficult to mechanically remove. Studies in Nebraska show its presence is responsible for crop losses of 15% in corn, 32% in sorghum, and 37% in soybean production.

Today, it is a crop weed but the plant was once used by American native people for fiber used to make rope and clothing. The fiber was crushed out of the stems and roots of the plant. The woody bark became material for baskets. More modern applications show it harvested in fall for string and cordage.

Ancient medicine used it as a sedative and treatment for syphilis, worms, fever, rheumatism and more. The woody herb is a spreading threat in agricultural situations today and a common topic is how to get rid of dogbane.

The plant is an herbaceous perennial which grows in tilled or untilled fields, ditches, roadsides, and even the landscaped garden. It has a woody stem with stiff green oval leaves arranged opposite along the purplish stem. The plant exudes latex-like sap when broken or cut, which may irritate skin.

It produces small whitish green flowers that become characteristic slender seed pods. The pods are reddish brown, sickle shaped, and 4 to 8 inches (10-20 cm.) long with slightly hairy, flat brown seeds inside. This is an important feature to note about the hemp dogbane description, as it differentiates the plant from milkweed and other similar looking weeds.

The deep taproot and creeping peripheral root system enables hemp dogbane weed patches to double in size in one season.

How to Get Rid of Hemp Dogbane

Mechanical control has limited effectiveness but can reduce the plant’s presence the next season. Tilling will control seedlings if used within six weeks of their appearance.

Chemical control has the greatest chances of success, especially on established stands of the weed, except in soybeans where there is no acceptable herbicide control. Apply to the plant before flowering occurs and follow application rates and methods. In studies, high concentrations of glyphosate and 2,4D have been shown to give as much as 90% control. These need to be applied after crops are harvested in cropland situations but will then only give 70 to 80% dogbane control.